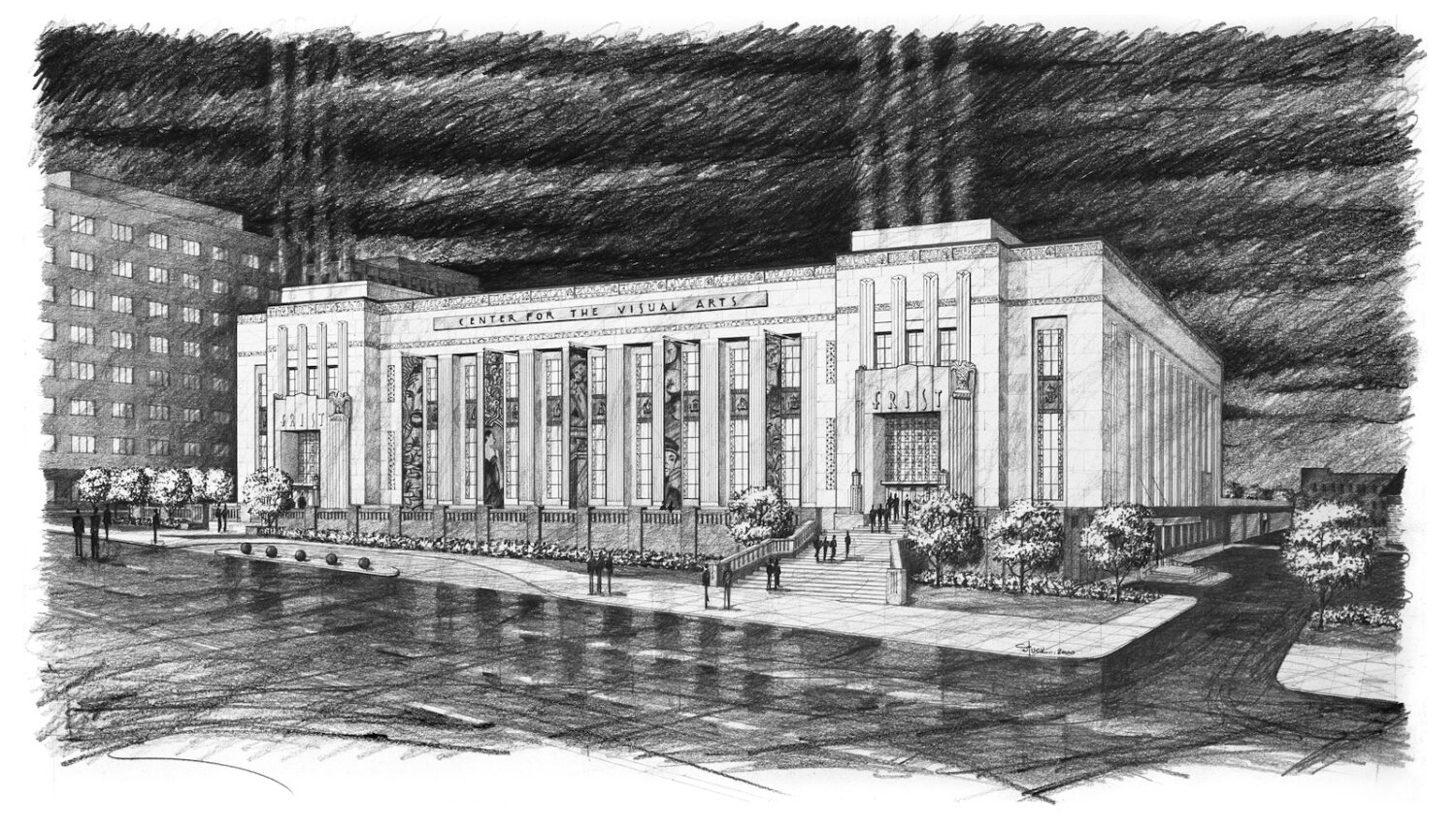 A Landmark Repurposed celebrates the historic building that the Frist Art Museum is privileged to occupy—Nashville’s former main post office.

Commemorating the Frist’s 20th anniversary, this reimagined exhibition with updated design and expanded narrative highlights the building’s role as a civic institution, from its creation as the city’s main post office in 1934 to its reopening as an art museum on April 8, 2001. Through archival images, architectural drawings, “Then and Now” photographs, news clippings, and original planning documents, guests will learn about the building’s distinctive architectural styles, as well as how historical events affected the construction and function of the post office. The exhibition will also address how buildings can be repurposed, making connections with American Art Deco: Designing for the People, which will be on view in the Ingram Gallery from October 8, 2021, through January 2, 2022.

Constructed in 1933–34 under the direction of local firm Marr & Holman, the building was financed by the U.S. Treasury Department’s Office of Construction. Following guidelines from the Office of the Supervising Architect, the building displays the two most distinctive architectural styles of the period: “starved” or “stripped” classicism and art deco.

During the Depression, architects working for the federal government were expected to express in their buildings the values of permanence, stability, and order—values that a classical style had traditionally embodied—but in forms streamlined to suggest progress and simplified to lower production costs. Inside, cast aluminum doors and grillwork, as well as colored marble and stones on the floors and walls, follow the more decorative trend commonly known as art deco, which had developed in commercial interiors during the 1920s.

The building has long been central to the life of the city. During its construction, unemployed workers gathered by the hundreds at the building site, seeking jobs. World War II soldiers sent last letters to loved ones before boarding trains next door at Union Station on their way to the European front. Every April, long lines of last-minute tax filers formed, with postal workers sometimes accepting the returns in the street.

In 1984, the post office building was officially added to the National Register of Historic Places. Two years later, however, a new main postal distribution center was constructed on Royal Parkway, near Nashville International Airport, and much of the old building was no longer needed. After years of deliberation and with community demand, a solution for the building’s future was determined. Through a unique public-private partnership between Metro Nashville government and Dr. Thomas Frist, Jr., the building would be transformed into a visual arts center.

Tuck-Hinton Architects of Nashville guided the preservation of the post office building’s architectural details and spirit. The original pine floors were taken up, refinished, and reinstalled, and the huge high-ceilinged sorting rooms in the center of the original facility were naturally suited to their new role as spacious exhibition galleries. The former skylight in the center of the building, previously covered in the 1950s, had its function resurrected in the new design, accompanied by clerestory windows that now light the atrium and the grand staircases.

The building began its second life as the Frist Center for the Visual Arts on April 8, 2001, with the mission to present and originate high quality exhibitions with related educational programs and community outreach activities. Since opening, the Frist has hosted artists and artworks from collections around the world and invited Nashville’s community members and visitors to share in its vision of inspiring people through art to look at the world in new ways. On April 2, 2018, the name was formally changed to the Frist Art Museum to convey more clearly what visitors can expect when entering the building. 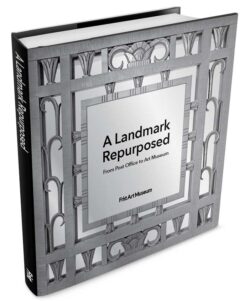 A twentieth-anniversary edition of the exhibition catalogue, now titled A Landmark Repurposed: From Post Office to Art Museum, is available in our Gift Shop. For more information, contact giftshop@FristArtMuseum.org.

The volume features a preface by Billy Frist, chair and president of the Frist Art Museum board of trustees, and an epilogue by Susan H. Edwards, Frist Art Museum executive director and CEO.

The contents from the original book include historian Christine Kreyling’s essay about our landmark building and its position within Nashville’s architectural history. This revised edition was designed and produced by renowned art book publisher Lucia | Marquand.

We also thank the members of the Art Deco Society, whose support helps with the upkeep and maintenance of our historic 919 Broadway building.

The Frist Art Museum is celebrating our 20th birthday. 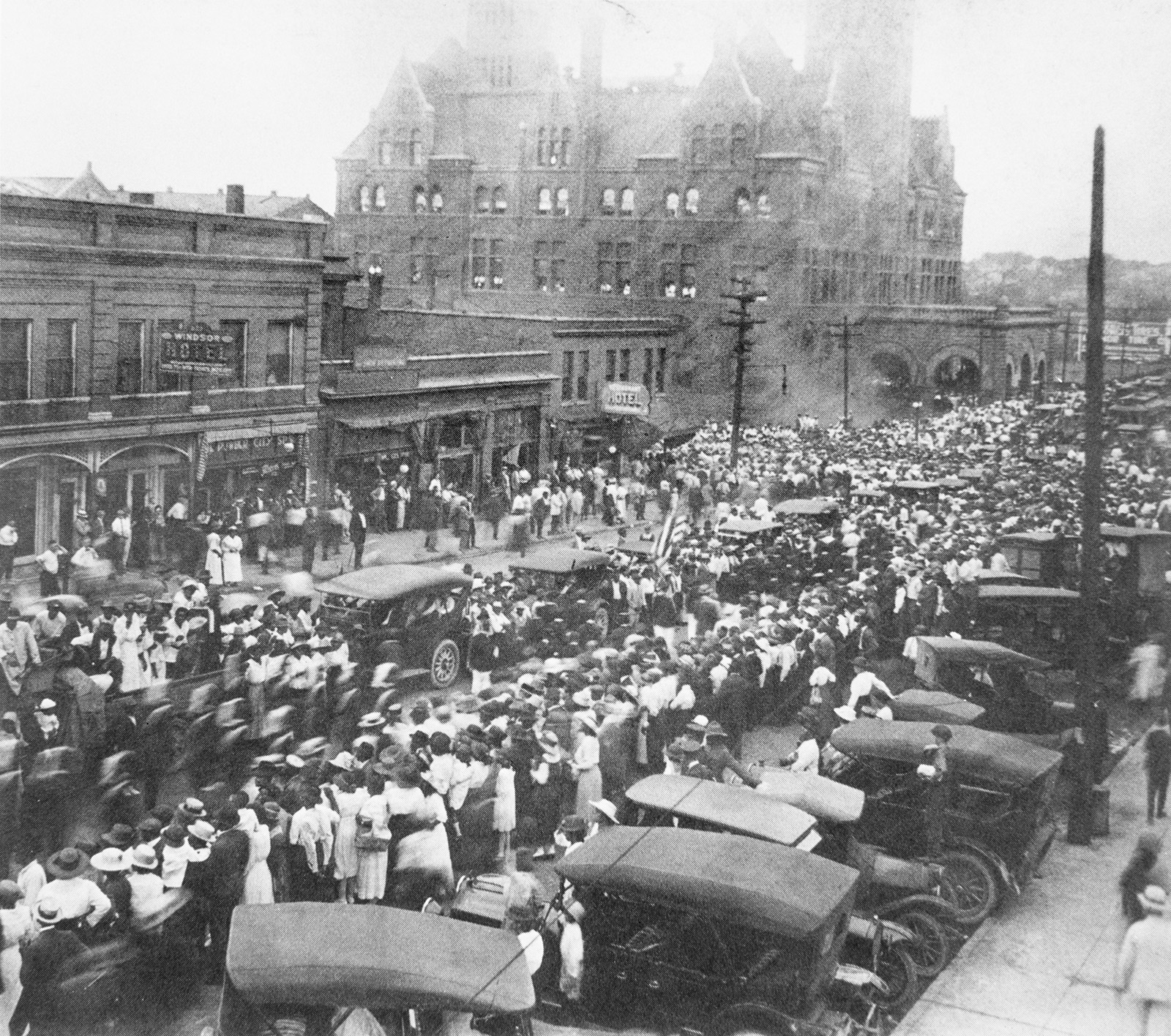 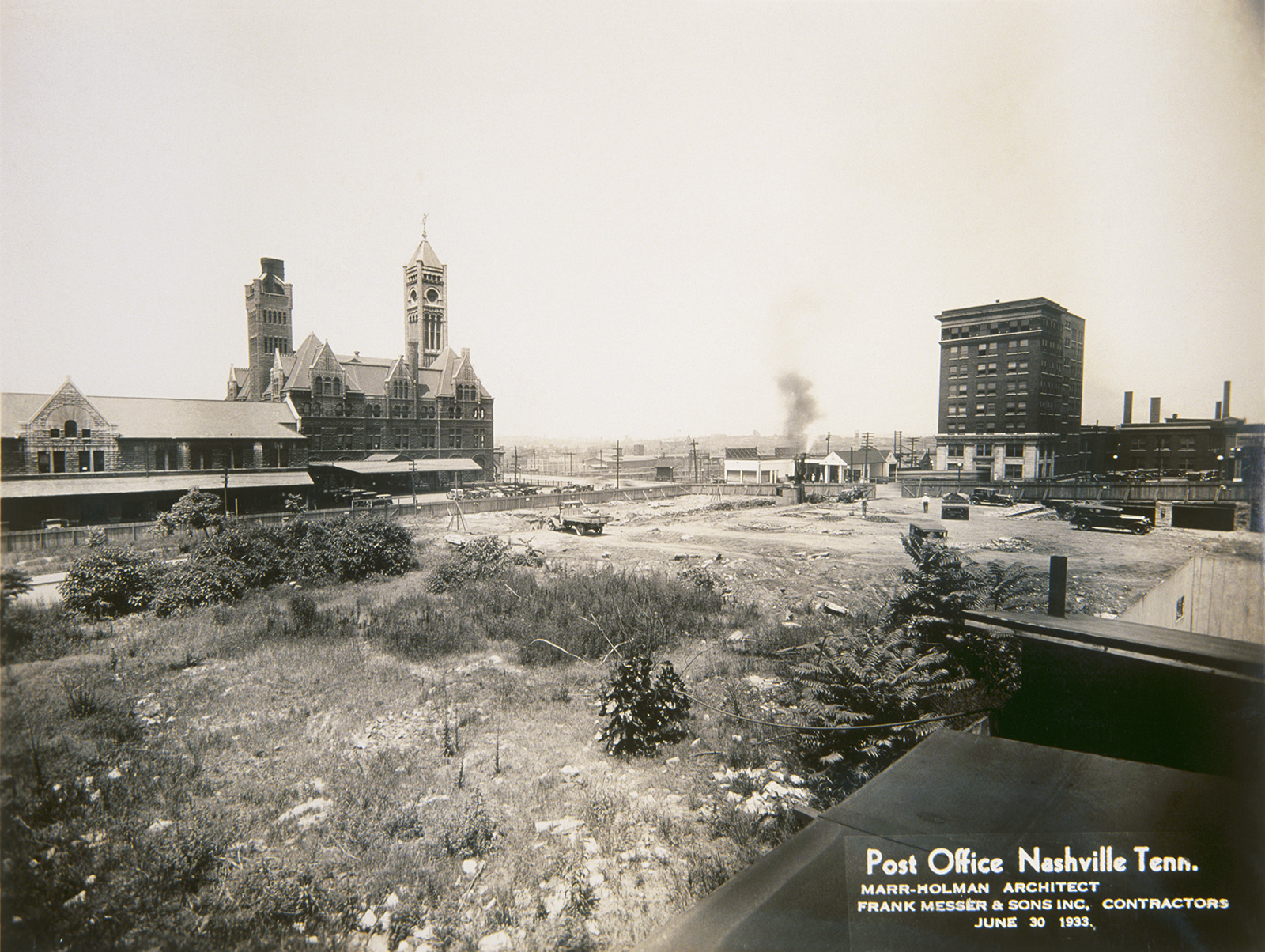 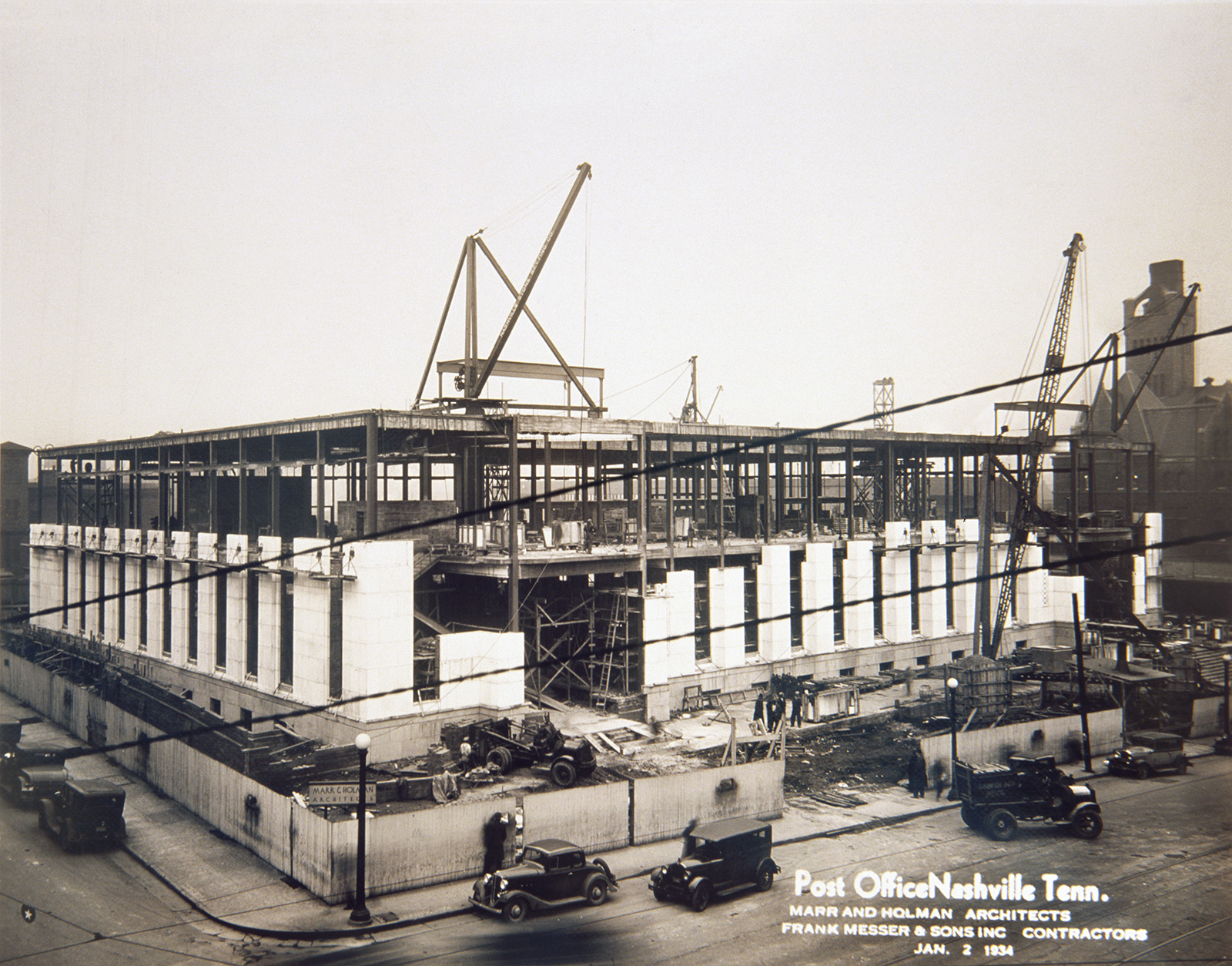 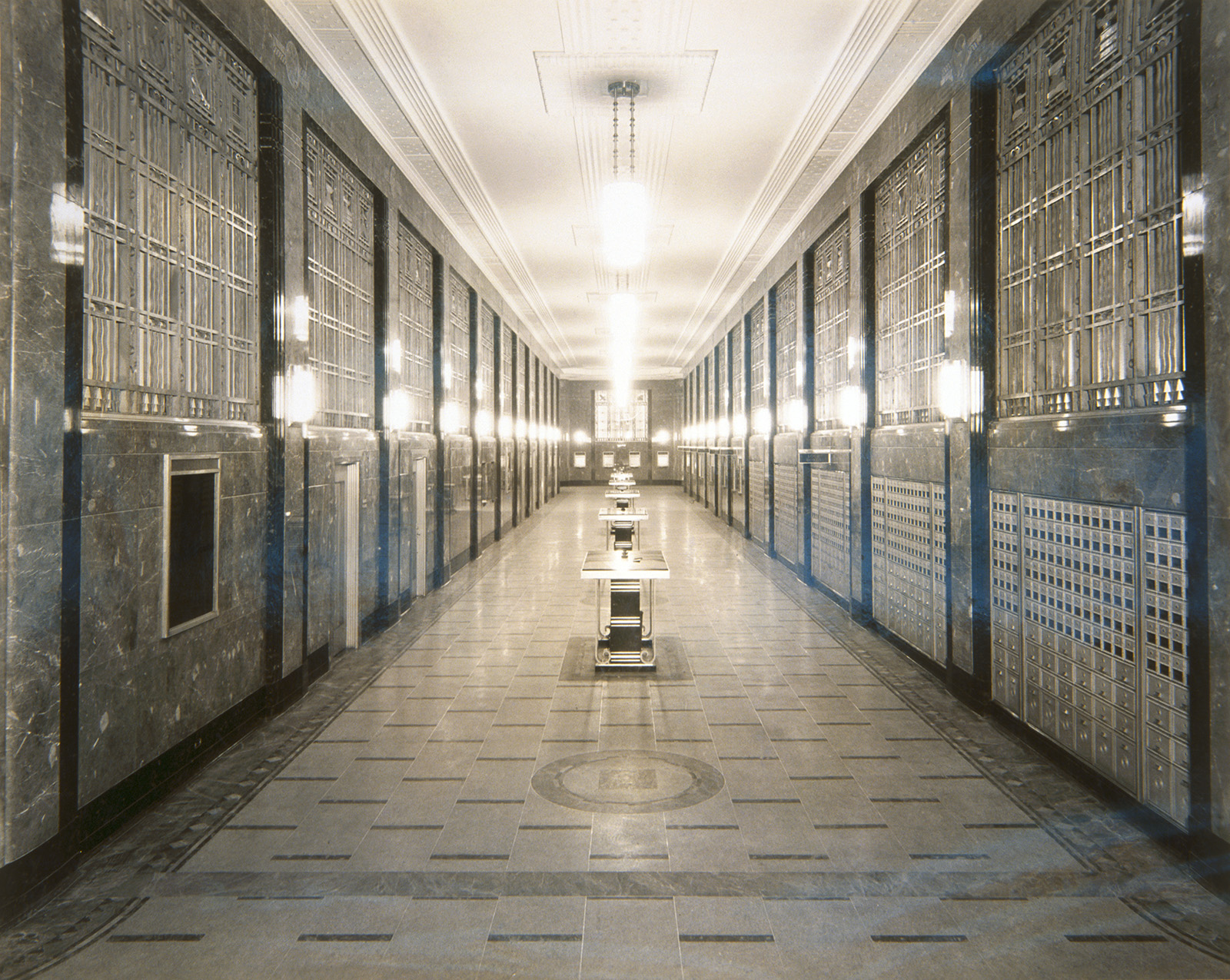 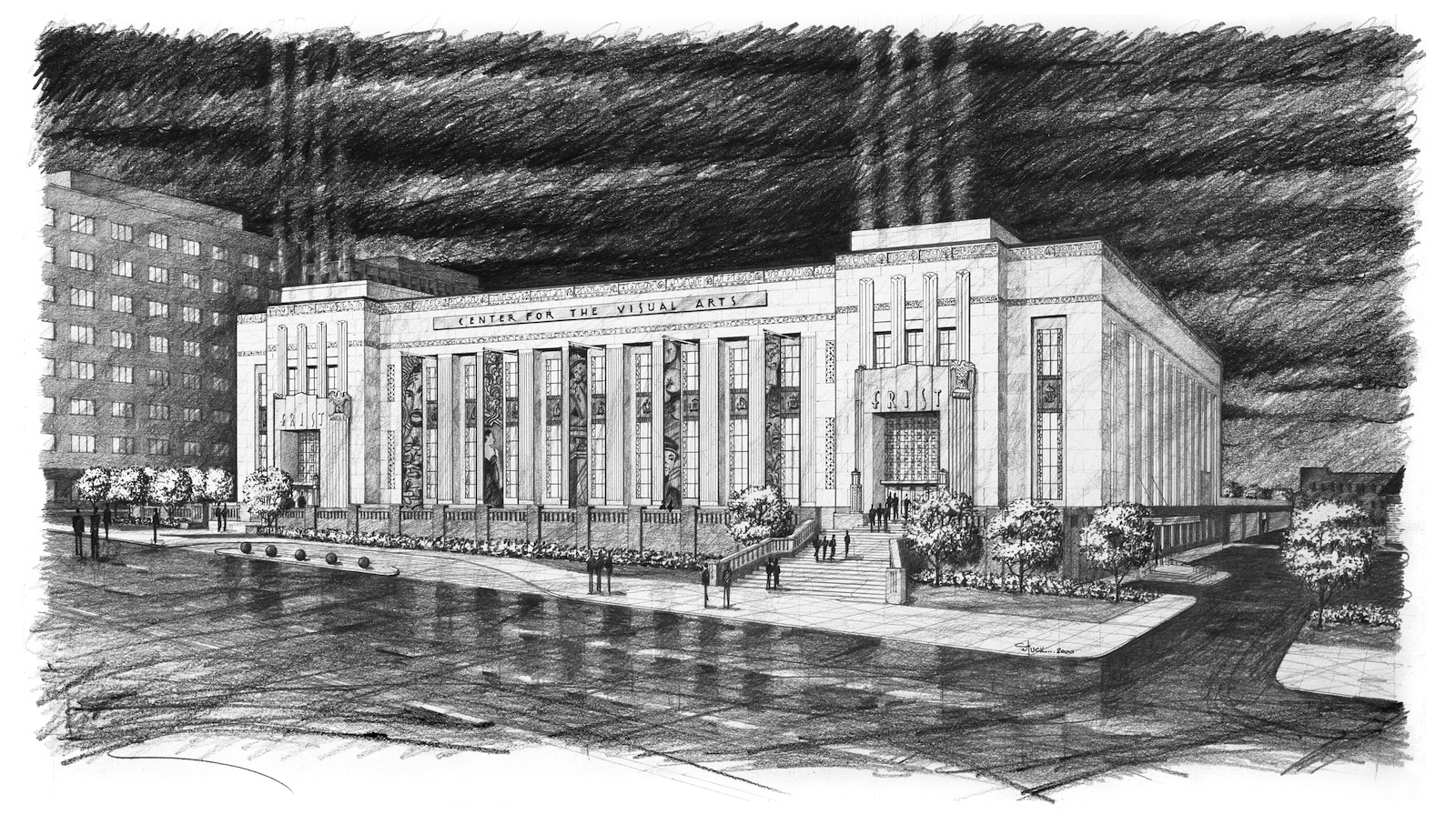 Seab A. Tuck III, for Tuck-Hinton Architects. Frist Center for the Visual Arts. Based on a photograph of the Marr & Holman presentation drawing, Tennessean archives. Graphite on paper, 13 3/4 x 24 in. Frist Art Museum. Photo: Bill LaFevor 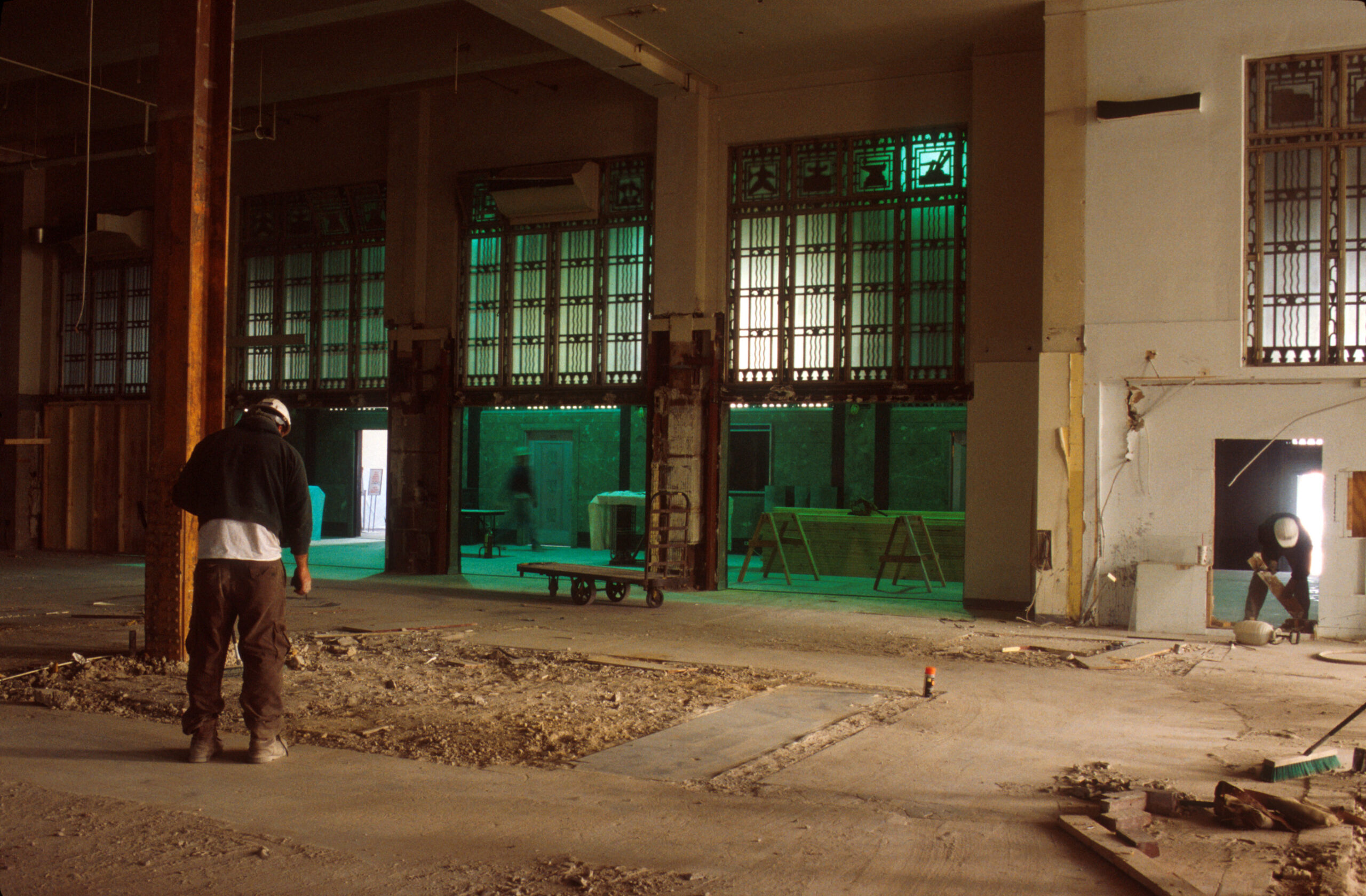 In the Ingram Gallery, facing the Grand Lobby, during the transformation of the old post office space into an art center.