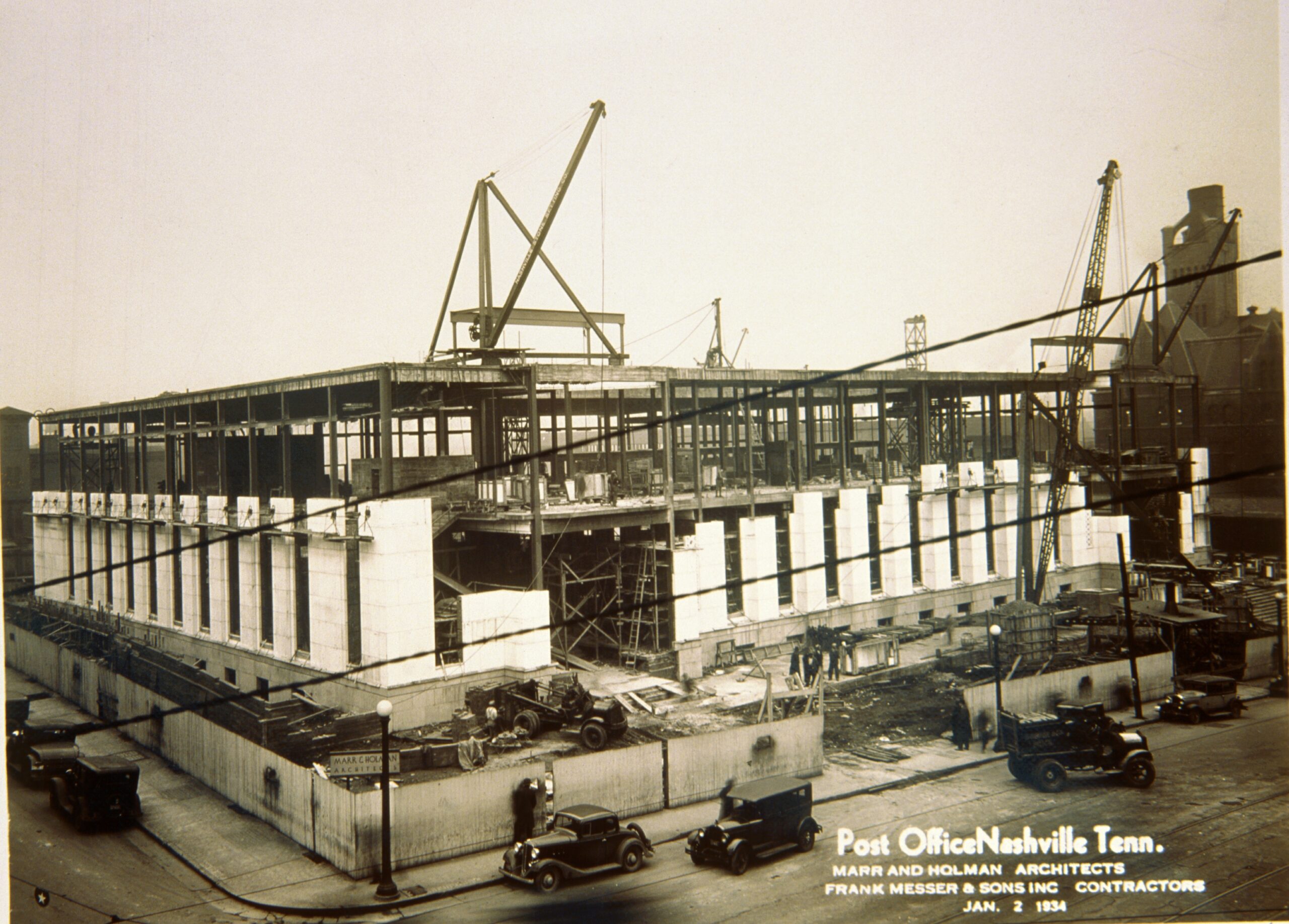 The Frist Art Museum is not only an important cultural focal point for the community, it is also a significant architectural structure. The Frist is privileged to occupy one of Nashville’s great historic landmarks—the former main post office. Constructed from 1933 to 1934 under the direction of the local architectural firm of Marr & Holman, the building was financed by monies appropriated by Congress during the Hoover administration. Following guidelines from the Office of the Supervising Architect for such public buildings, Nashville’s post office displays both of the most distinctive architectural styles of the period: classicism and Art Deco.

The spare, streamlined exterior—faced in white Georgia marble with gray-pink Minnesota granite—is an example of “starved” or “stripped” classicism. During the Depression, architects were expected to express in their buildings the values of permanence, stability, and order—values that a classical style had traditionally embodied—but in forms streamlined to suggest progress and to lower production costs. Inside, however, cast aluminum doors and grillwork, as well as colored marble and stones on the floors and walls, follow the more decorative trend commonly known as Art Deco, which had developed in commercial interiors in the 1920s.

In 1984 the post office building was listed officially on the National Register of Historic Places. A new main postal distribution center, however, was constructed near the Nashville airport in 1986. The Broadway office became a downtown branch, using only part of a single floor in the three-story building.

A community-wide “visioning process” among Nashville’s citizens in the early 1990s highlighted the public desire for a major new visual arts facility. A committee determined that the underused post office building would make an ideal home for the new art center.

Thomas F. Frist, Jr., M.D., and his family, through the charitable Frist Foundation, committed to lead the effort to create a center. The Foundation formed a unique public/private partnership with the U.S. Postal Service, the City of Nashville, and the Metropolitan Development and Housing Agency to acquire the historic building and surrounding land as the new home for an art center. In 1998 the building’s ownership transferred to the City of Nashville for the purpose of creating the Frist Art Museum. The remaining branch post office relocated to renovated space on the lower level of the building in November 1999.

The former post office space is perfect as a visual arts center. The huge sorting rooms with high ceilings in the center of the original facility were naturally suited to become spacious exhibition galleries. The former skylight in the center of the building, previously closed and built over in the 1950s, had its function resurrected in the new design with the creation of clerestory windows to light the foyer and the new grand staircases.

Listen to an Architecture Tour

WINDOW RESTORATION
The research project informing the restoration of 919 Broadway’s historic windows is supported in part by the Historic Preservation Fund, which is administered by the National Park Service, Department of the Interior, and the Tennessee Historical Commission.