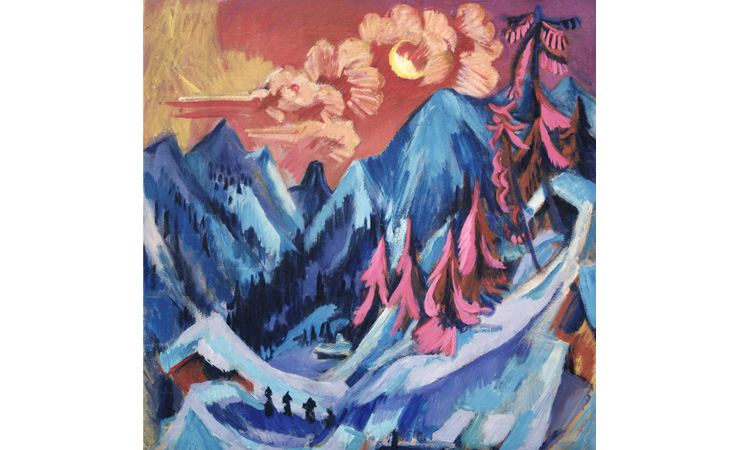 German Expressionism from the Detroit Institute of Arts

This exhibition features works from the Detroit Institute of Arts’ renowned collection of early twentieth-century German Expressionist paintings, sculptures, prints, and drawings, by artists who belonged to the groups known as The Blue Rider (active in Munich) and The Bridge (active in Dresden and Berlin). The Detroit collection contains major works by Wassily Kandinsky, Otto Dix, Max Beckmann, Paula Modersohn-Becker, Franz Marc, and Ernst Ludwig Kirchner.

This exhibition was organized by the Detroit Institute of Arts.

With faith in development and in a new generation of creators and appreciators we call together all youth. As youth, we carry the future and want to create for ourselves freedom of life and of movement against long-established older forces. Everyone who with directness and authenticity conveys that which drives him to creation, belongs to us.1

Die Brücke sought to overthrow the established order of art and society in turn-of-the-century Germany. Working together until 1913, its members developed a group painting style characterized by distorted forms, vigorous brushstrokes, and vivid colors. Simultaneously, they experimented with the starkness of traditional German black-and-white printmaking . Following in the footsteps of the Dutch artist Vincent van Gogh (1853–1890) and the Norwegian artist Edvard Munch (1863–1944), they focused on conveying psychological states and emotions rather than outward appearances. The young, self-trained artists of Die Brücke formulated the distinctive visual language and the fundamental premise of German Expressionism, one of the major movements in modern art.

This exhibition of German Expressionist painting, sculpture, and works on paper, which is drawn entirely from the extraordinary collection of the Detroit Institute of Arts (DIA), explores the entire breadth of this artistic movement from its beginnings around 1905 through 1950. The exhibition opens with the forerunners to Die Brücke who had freed themselves from the constraints and conservative tendencies of Germany’s academic system and annual salons. Some of these pioneers, such as the sculptor Wilhelm Lehmbruck and the painter-printmaker George Grosz, were dedicated individualists. The majority of these artists, however, helped to change the course of German art history by taking part in a secession—an organization formed in protest to the selection process, hanging conditions, and exclusion of foreign artists from state exhibitions. The Berlin Secession stood out as the most avant-garde and cosmopolitan; it was additionally significant because it welcomed women, who had always been excluded from the state academies and salons. The secessions mounted exhibitions of their own and their members were able to survive outside the state system thanks to visionary private art dealers who marketed and sold their work. These developments paved the way for the more radical breakthroughs of Die Brücke.

Curator’s Perspective: German Expressionism from the Detroit Institute of Art

German Expressionism from the Detroit Institute of Arts

Recommended Reading — German Expressionism from the Detroit Institute of Arts