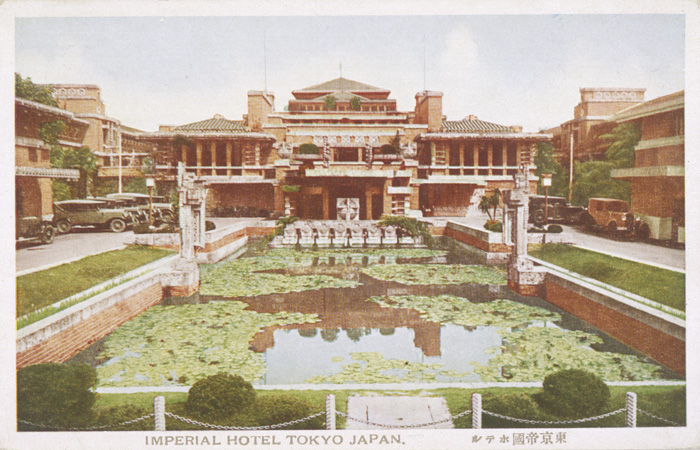 The flow of artistic and cultural influence between Japan and the West was not one way. While the Western artists featured in Looking East: Western Artists and the Allure of Japan were captivated by the exotic beauty and striking formal qualities of ukiyo-e prints, Japan embraced Western technology and culture as it rushed to assert itself on the global stage. Architecture played an important role in Japan’s presentation of itself as a modern nation. In 1915 the Imperial household and a host of investors commissioned the American architect Frank Lloyd Wright to build a Western style hotel in the heart of Tokyo called the Imperial Hotel.

The Education Gallery exhibition, Frank Lloyd Wright: Building the Imperial Hotel, allows visitors to explore in greater depth how a single Western architect approached the melding of Japanese and Western aesthetics to create a hotel that was intended to symbolize both cultural exchange and Japan’s modernity. Visitors can discover Wright’s design process and inspiration through architect’s drawings, photographs, ephemera and a digital rendering of the hotel created by the Harvard University Graduate School of Design.

From the grand facade of the hotel to the dinner service created for the cabaret bar, every component of the hotel’s interior and exterior was carefully designed to create a unified aesthetic experience. Wright’s profound admiration of Japanese art and his commitment to creating buildings uniquely suited to their environment made his Imperial Hotel a wonderful hybrid of Eastern and Western sensibilities.

The Frist Art Museum gratefully acknowledges the generous support of the Friends of Architecture.