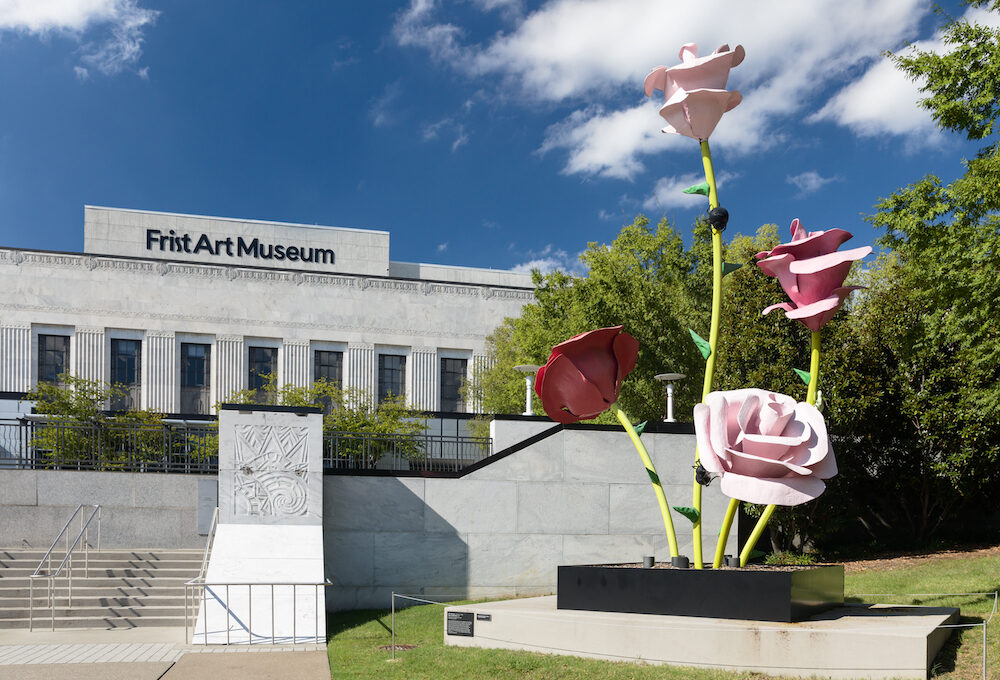 On permanent view at the Frist Art Museum’s Demonbreun Street entrance, Rose on 65th Street is from a series of thirty-eight sculptures of gigantic roses created by New York artist Will Ryman.

Causing an unsettling mixture of pleasure (because of their beauty) and dislocation (because of their scale), the sculpture inspires viewers to imagine: what if, as was the case with Alice in Wonderland or the children in Honey, I Shrunk the Kids, the work is not unnaturally large, but part of a world in which people have gotten smaller (a feeling that is not uncommon in a large metropolis)? This odd shrunken sensation is reinforced by the presence of giant insects on the stems and blossoms; we share the stage with not-so-little creatures we can no longer ignore.

Ryman’s sculptures often use humor to communicate existential unease, calling to mind the sardonic paintings of Philip Guston or the wry childlike narratives of Saul Steinberg. Ryman, who worked as a playwright before becoming an artist, has long been inspired by authors who convey life’s absurdity. As in such stories as Franz Kafka’s Metamorphosis (with its giant human cockroach) and Alice in Wonderland, the out-of-balance scale of his roses poses a question of hierarchy and perception—can art bring humanity’s inflated idea of its own importance back down to earth?