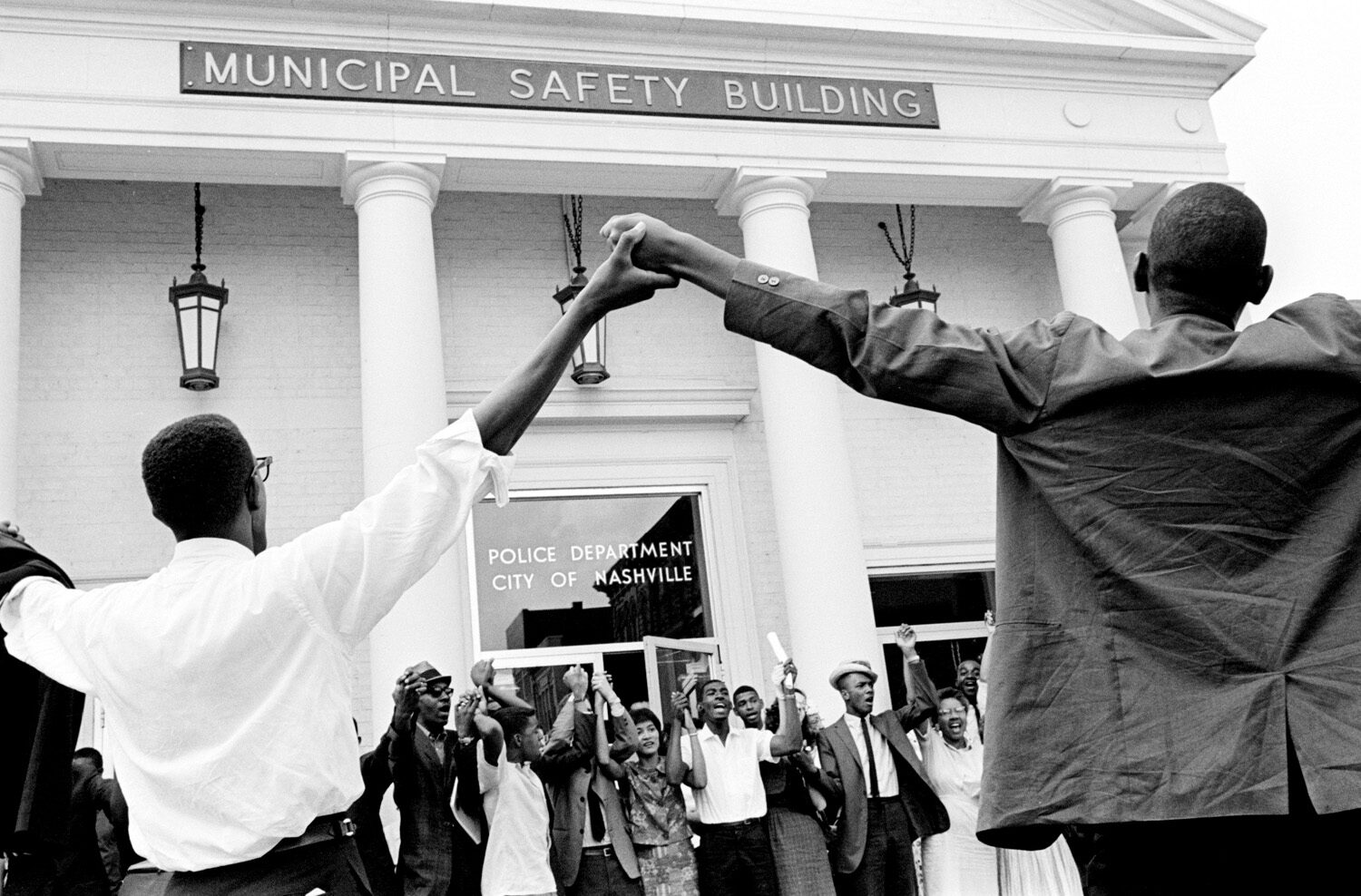 While fellow southern cities such as Birmingham, Greensboro, and Little Rock may have been the focus of more headlines, Nashville played an important role in the civil rights movement during the late 1950s and 1960s. In addition to being the first metropolis in the southeast to integrate places of business peacefully, it was a hub for training students in nonviolent protest, many of whom became influential figures on the national stage. During an April 1960 speech at Fisk University, Dr. Martin Luther King Jr. himself said, “I came to Nashville not to bring inspiration, but to gain inspiration from the great movement that has taken place in this community.” This legacy is worthy of reexamination fifty years after King’s death, when race relations and social justice are again at the forefront of our country’s consciousness.

The fifty photographs in this exhibition were taken between 1957, the year that desegregation in public schools began, and 1968, when the National Guard was called in to surround the state capitol in the wake of King’s assassination in Memphis. Of central significance are images of lunch counter sit-ins, led by students from local historically black colleges and universities, that took place in early 1960. The photographs were sourced from the archives of Nashville’s two daily newspapers at the time: The Tennessean and the now-defunct Nashville Banner. Some were selected to be published, but many were not. This exhibition offered an opportunity to consider the role of images and the media in shaping public opinion, a relevant subject in today’s news-saturated climate.

All images generously provided by The Tennessean and the Nashville Public Library, Special Collections, which houses the Nashville Banner Archives

For their guidance with this project, we give special thanks to Andrea Blackman and Beth Odle at the Nashville Public Library, Special Collections Division; Maria De Varenne, Larry McCormack, and Ricky Rogers at The Tennessean.

We Shall Overcome: Press Photographs of Nashville during the Civil Rights Era
Edited by Kathryn E. Delmez
Foreword by John Lewis

We Shall Overcome: Press Photographs of Nashville during the Civil Rights Era was named one of the best art books of 2018 by the New York Times. It was also awarded the 2019 Norman L. and Roselea J. Goldberg Prize for the best book published in art or medicine, Vanderbilt University.

Essays by Linda Wynn of Fisk University and the Tennessee Historical Commission and Susan H. Edwards, executive director of the Frist Art Museum, offer historical context on Nashville during the civil rights era and on photojournalism, respectively. Congressman John Lewis’s foreword recounts memories of his time in Nashville and reminds us that there is still work to be done to build King’s Beloved Community. 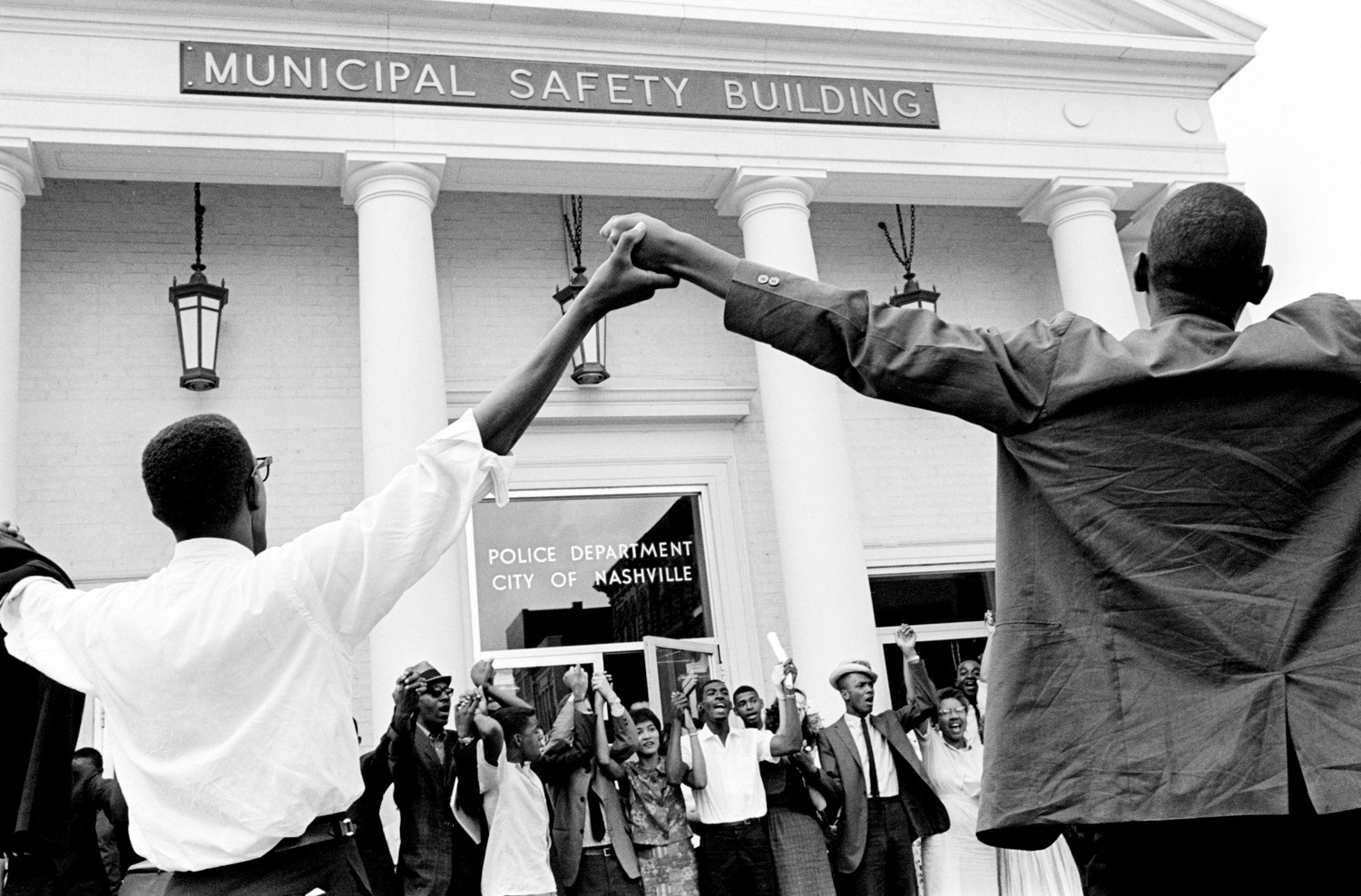 Demonstrators sang in front of the Nashville Police Department on August 7, 1961, protesting what they called police brutality in a racial clash two nights earlier. They criticized “inadequate” police protection and called for qualified black personnel to “replace incompetent officers on the police force.” Photo by Eldred Reaney. Courtesy of The Tennessean 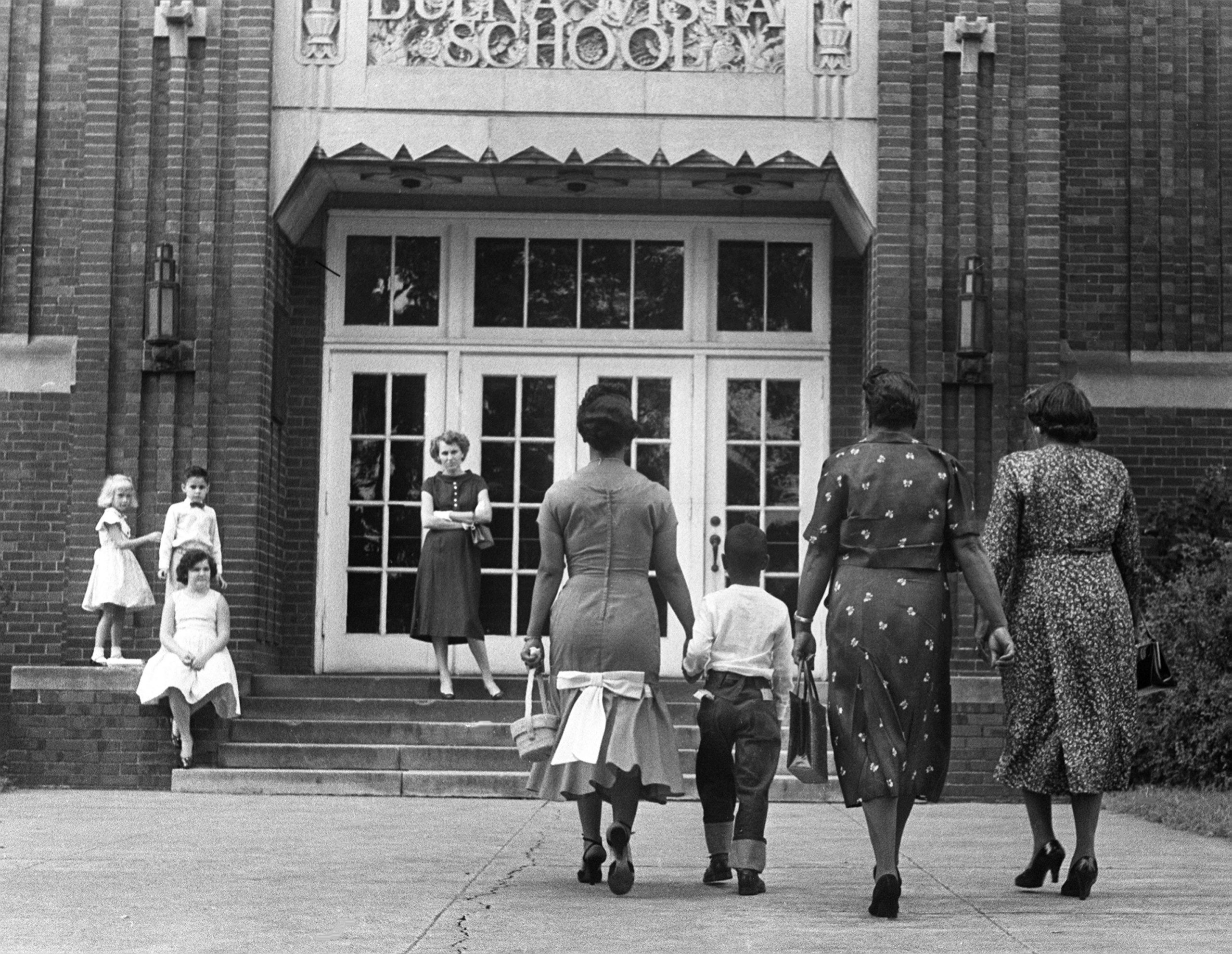 Erroll Groves (center) holds the hand of his mother, Iridell Groves, as they walk to Buena Vista School on the first day of desegregation in Nashville’s public schools. September 9, 1957. Photo by Eldred Reaney. Courtesy of The Tennessean 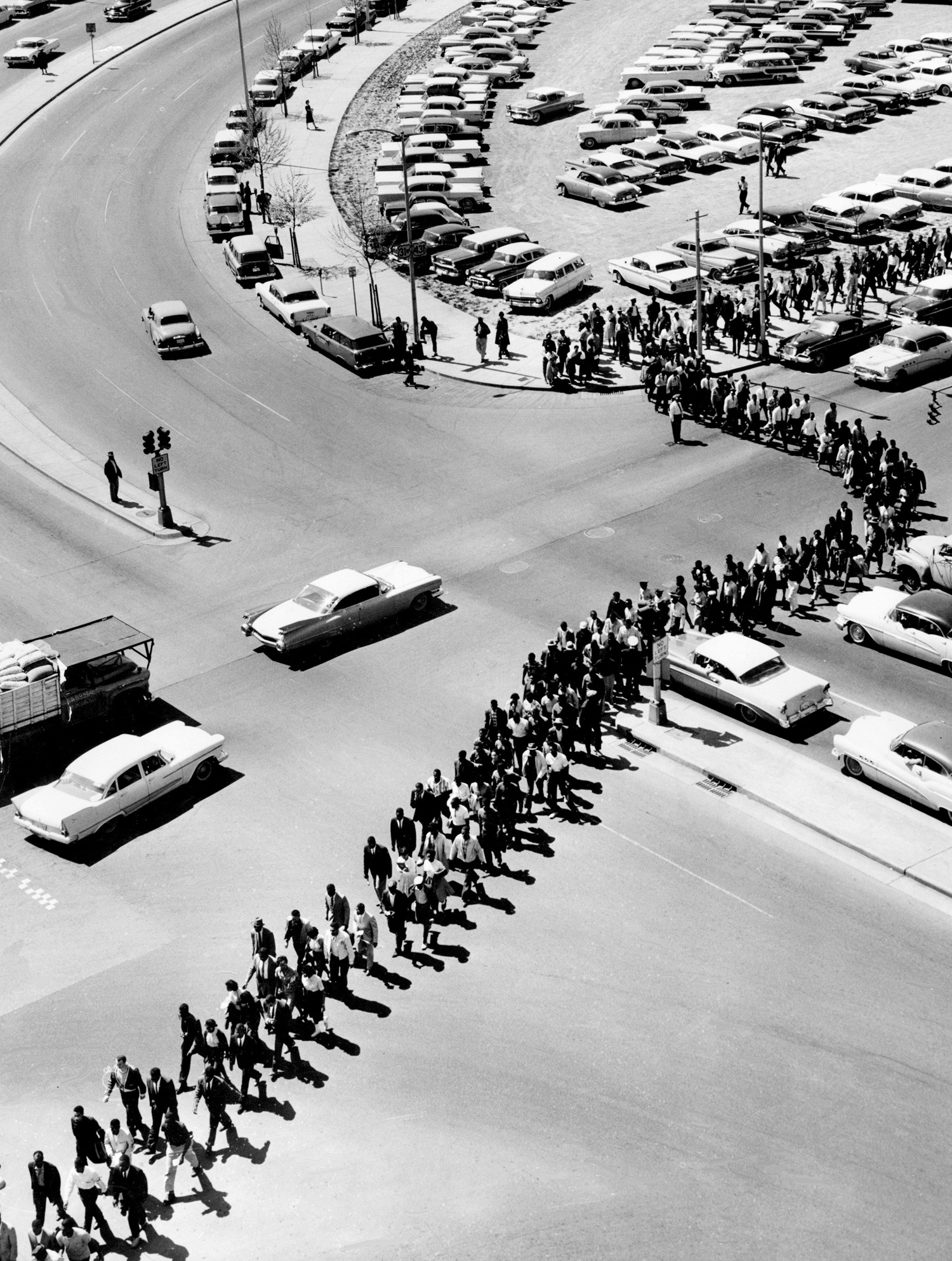 Like a giant serpent, a line of black college demonstrators wound its way around the courthouse area, coming out from Jefferson Street and James Robertson Boulevard on April 19, 1960, the day of the Z. Alexander Looby bombing. They marched three abreast, with the line stretching across ten blocks. Photo by Eldred Reaney. Courtesy of The Tennessean 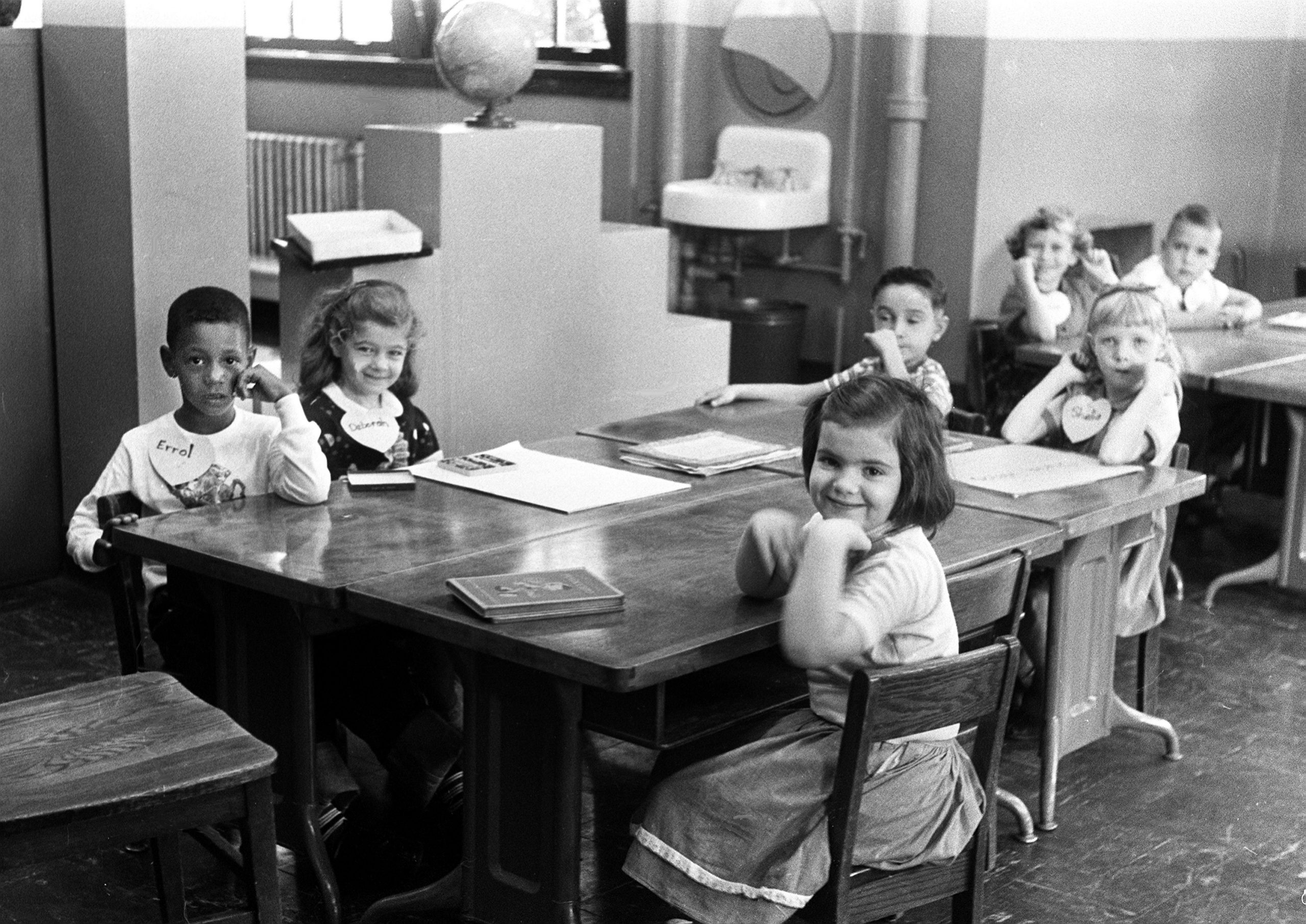 Erroll Groves (left) sat with his new classmates during class at Buena Vista School on the first day of desegregation in Nashville’s schools. Groves was one of three black children who went to the school that day. September 9, 1957. Photo by Eldred Reaney. Courtesy of The Tennessean 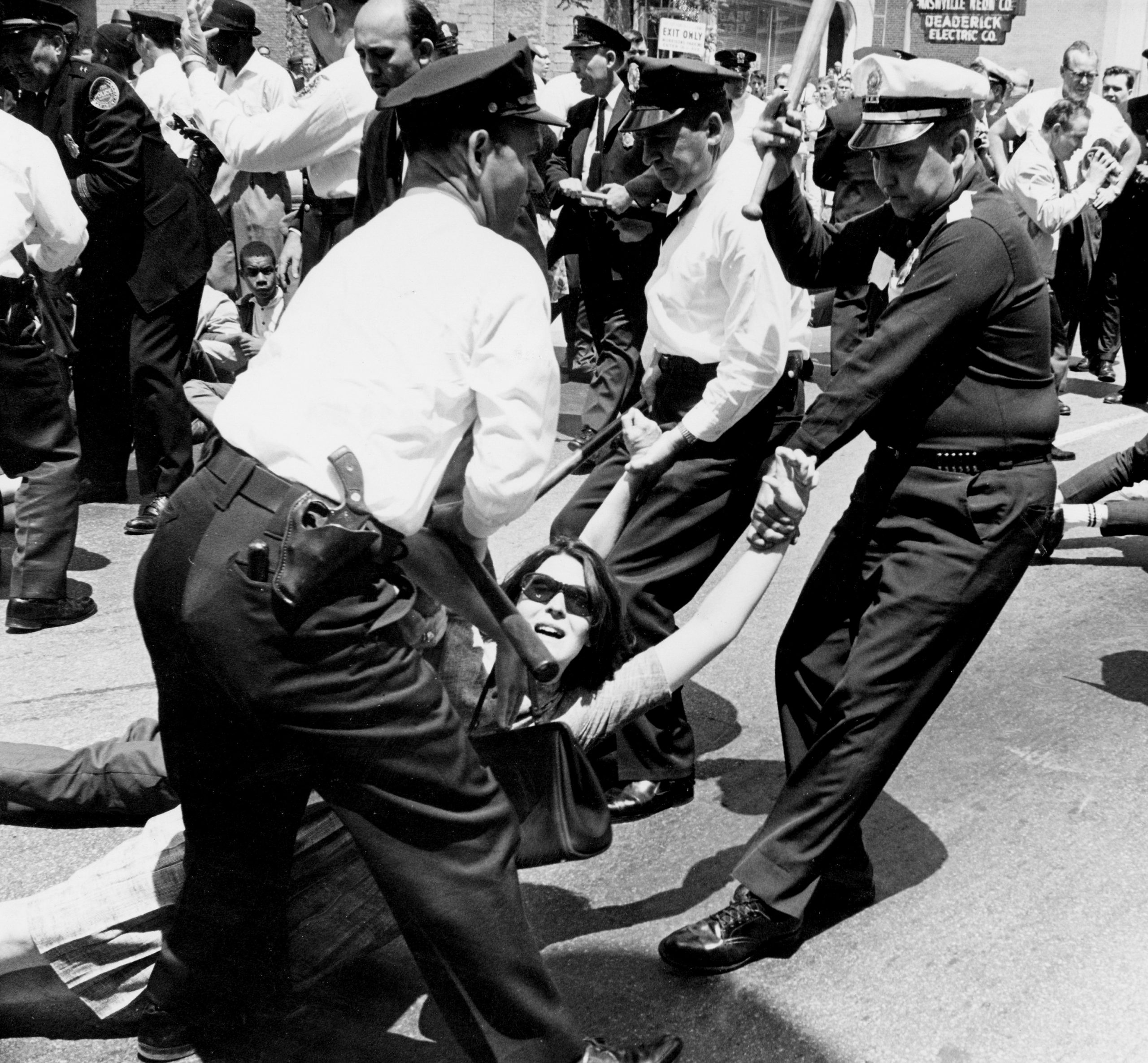 A white civil rights protester was dragged out of the middle of West End Avenue in front of Morrison’s Cafeteria. The mass arrests came on the third straight day of anti-segregation demonstrations. April 29, 1964. Photo by Harold Lowe Jr. Courtesy of The Tennessean 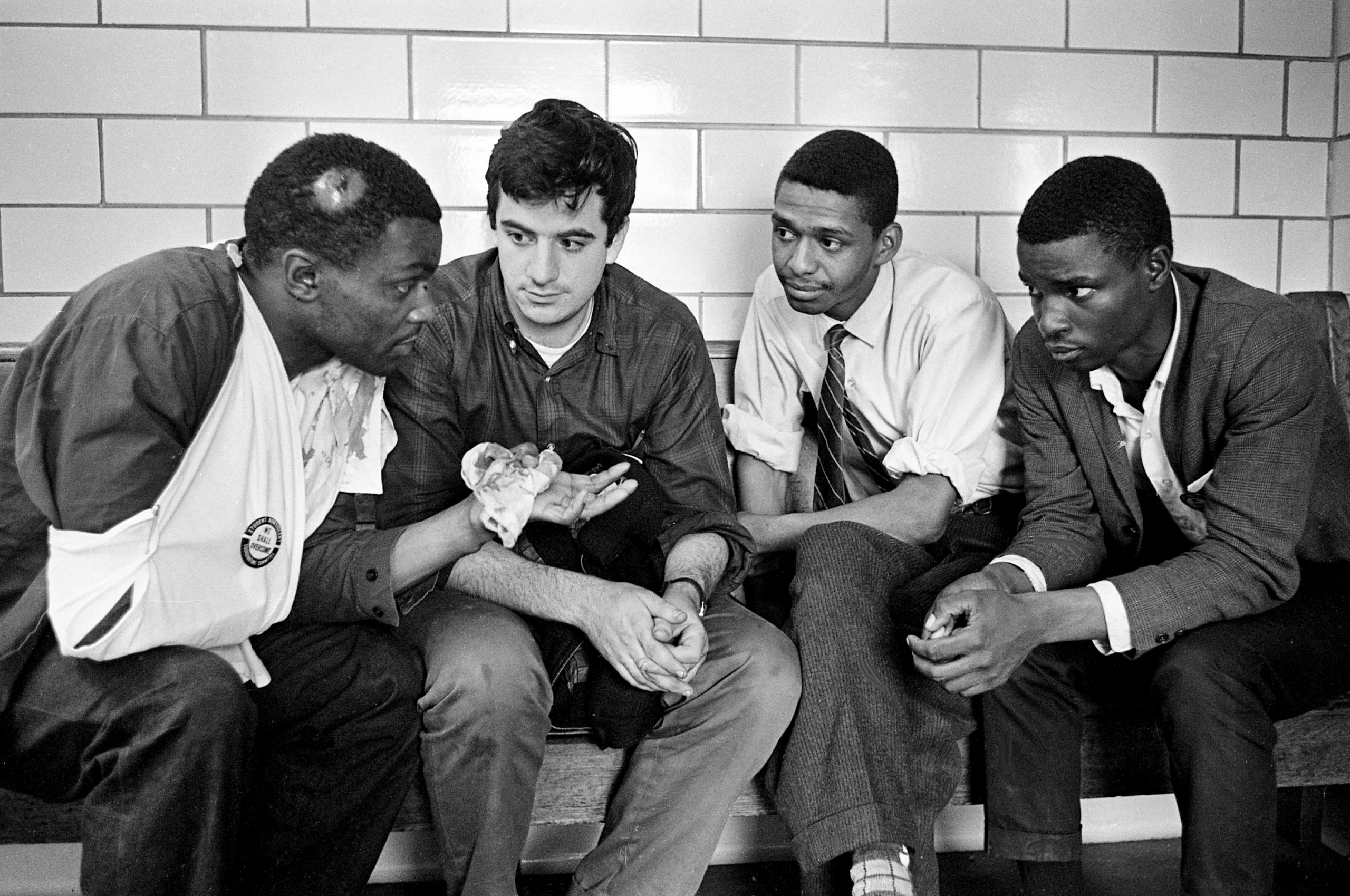 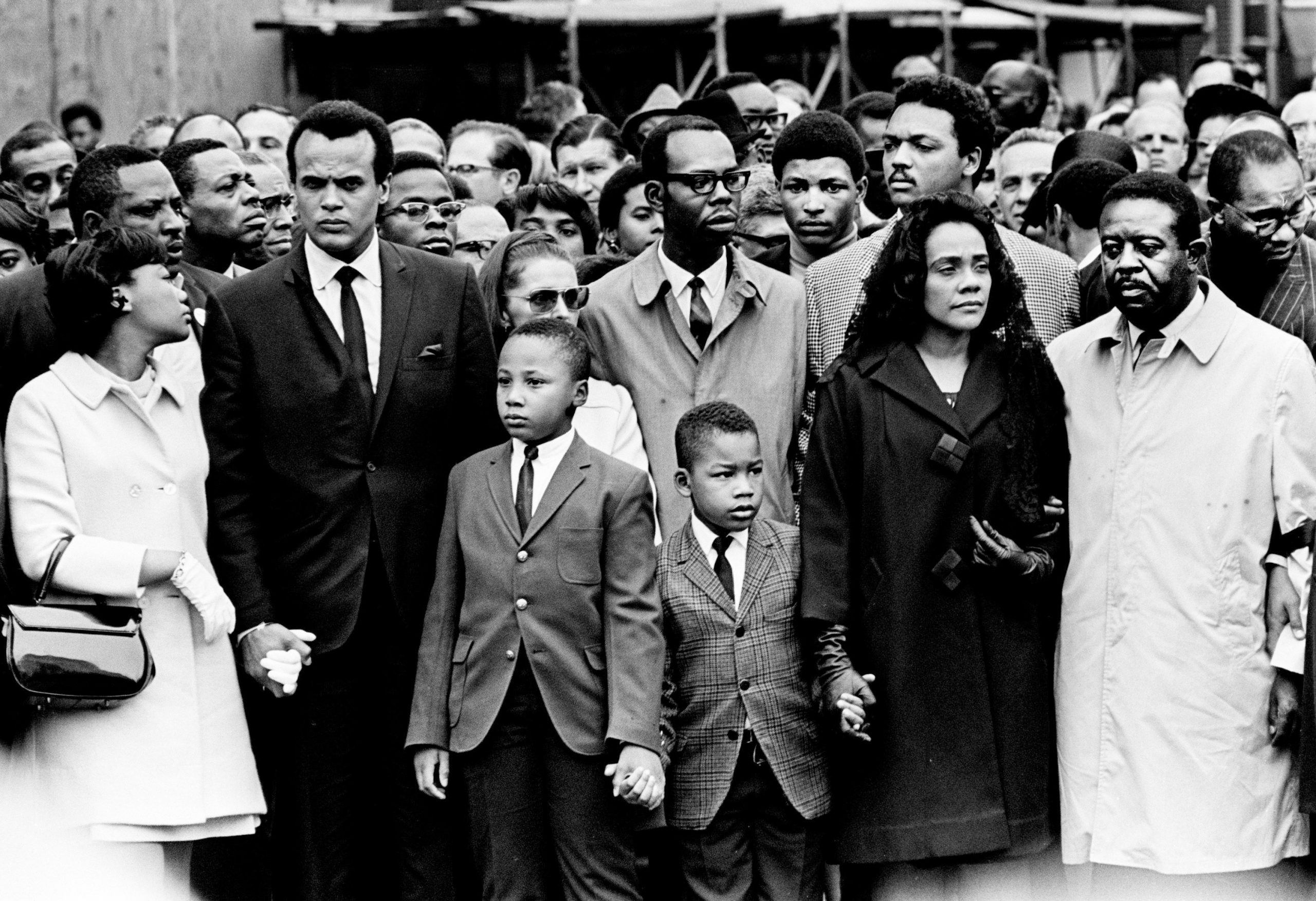 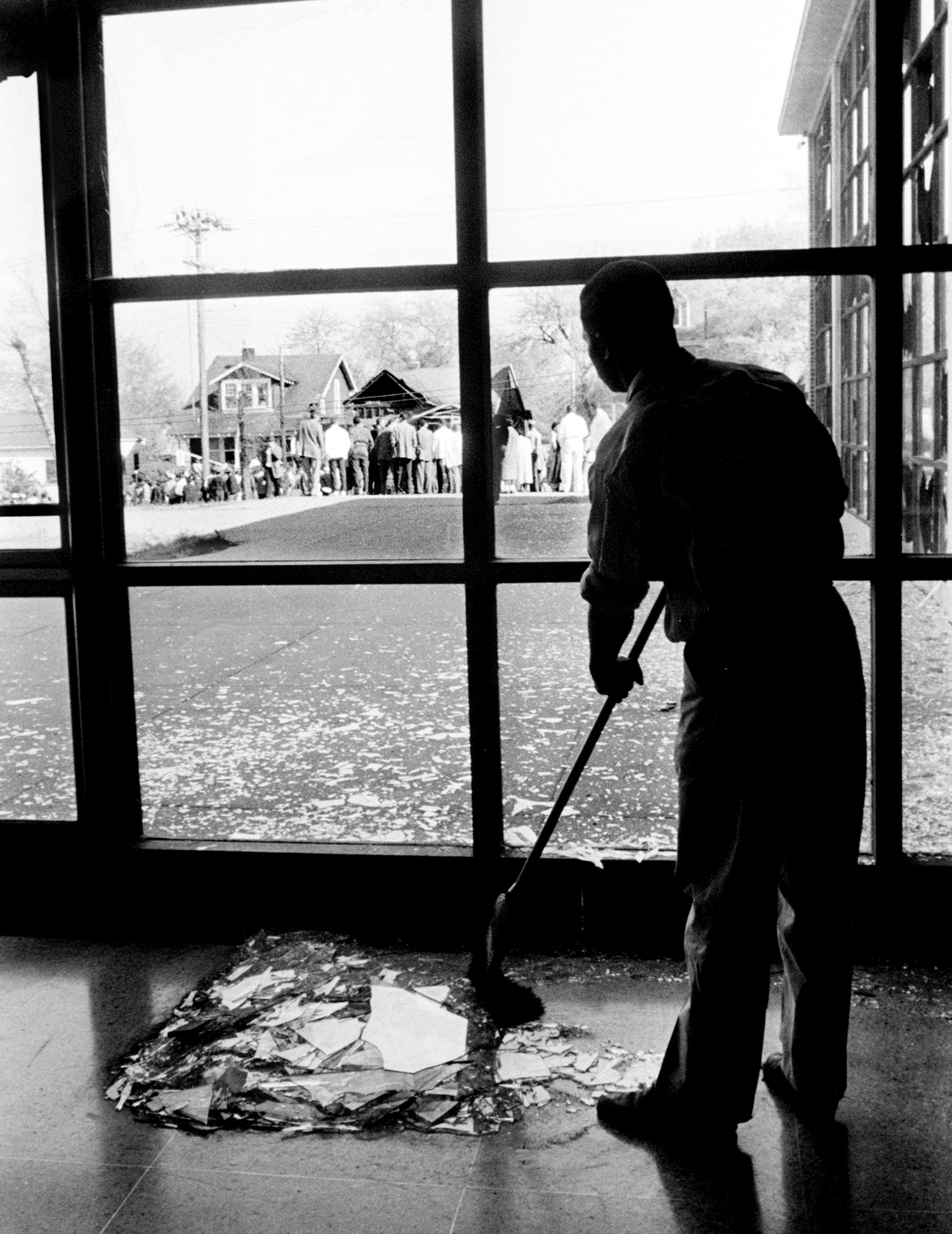 Silhouetted against disaster, John Thomas Martin wields his broom, sweeping up the fragments of glass from shattered windows in the Meharry Medical College alumni building. In the background, a curious crowd gathers at the bombed home of Z. Alexander Looby. The bombing of the house shattered 147 windows at the college. April 19, 1960. Photo by Joe Rudis. Courtesy of The Tennessean 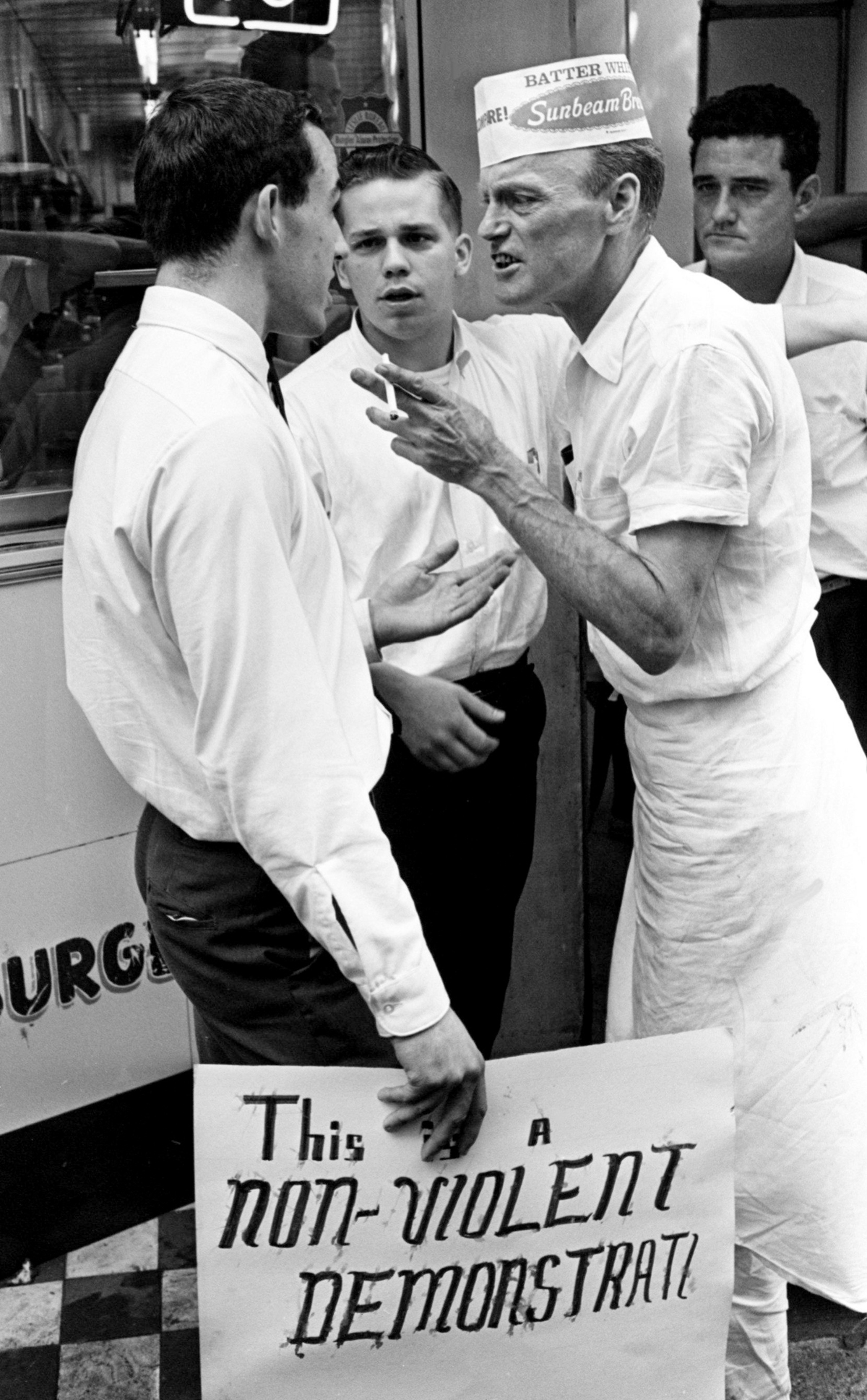 On April 27, 1964, Archie Allen (left), a civil rights demonstrator, talked with employees of the Tic Toc Restaurant on Church Street in downtown Nashville. Moments later, Allen was attacked by the employees and knocked down to the sidewalk. Photo by Jack Corn. Courtesy of The Tennessean