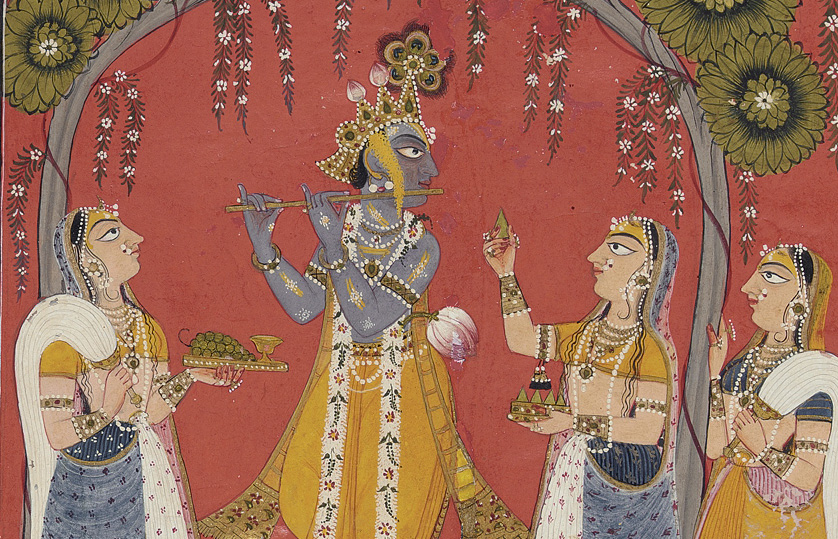 Krishna Fluting for the Gopis, page from an illustrated Dashavatara series, ca. 1730. Opaque watercolor and gold on paper, 10 1/4 x 8 in. Collection of Catherine and Ralph Benkaim

Vishnu: Hinduism’s Blue-Skinned Savior was the first major museum exhibition to focus on Vishnu—one of Hinduism’s three major deities. More than 170 paintings, sculptures, and ritual objects made in India between the fourth and twentieth centuries provided a brief survey of Hindu art styles as well as an examination of Vishnu-worshipping traditions.

Known as Hinduism’s gentle god, Vishnu is easily recognized in paintings because of his blue skin, a reflection of his calm, cool demeanor and his associations with sea and sky. An interesting figure in his primary form, the complexity of Vishnu’s character becomes clear when he assumes new forms, known as avatars, in order to save the earth from various dangers. Vishnu’s ten avatars, including Rama and Krishna, reveal the multiplicity of ways that one can envision and interact with the divine.

The exhibition was accompanied by an illustrated catalog published by Mapin Publishing, an Indian art book publishing company.

Hinduism, the world’s third-largest religion, was first codified in India around 1000 BCE and has been practiced there since that time, perpetually absorbing new beliefs and approaches, while continuing to recognize the sanctity of older traditions. Each of the three primary Hindu deities—Vishnu the Preserver, Shiva the Destroyer, and Devi the Great Goddess—is believed by his worshippers to be responsible for creating and maintaining the cycle of life, and to be a portal to ultimate salvation. Some Hindus affiliate themselves with one of the three gods, while others worship more broadly. Those who worship Vishnu—an extremely large and diverse group—are known as Vaishnavas.

Known as Hinduism’s gentle god, Vishnu is easily recognized by his blue skin and his poised and calm demeanor, as well as by the objects with which he is traditionally portrayed. While he is an interesting figure in his primary form, the complexity of Vishnu’s character becomes clear when he is represented in the numerous embodiments, or avatars, in which, according to legend, he has descended to earth to save it from a multitude of dangers. The avatars include not only the humans Rama and Krishna, but also animals, ranging from a fish to a turtle to a lion. Many Vaishnavas choose to worship the god in one of these personae rather than, or in addition to, his primary form. To his contemporary worshippers, Vishnu is the embodiment of light, truth, and limitless power, a formless entity beyond human comprehension. But this has not always been the case. Rather, the nature of the god has changed substantially, growing more multifaceted and nuanced over time. A large body of engaging legends describing Vishnu’s deeds and contributions to humanity enables even the uninitiated to develop a sense of the god’s personality.

Vishnu: Hinduism’s Blue-Skinned Savior was organized thematically, opening with “Images of Vishnu,” an exploration of the god’s fundamental traits. This section began by introducing Vishnu in his primary form—human in shape, most often portrayed with four arms—through some of the finest sculptures of their time. These range widely in date, from the fourth to fourteenth century; in material, including sandstone, granite, and bronze; and in aesthetic, from simple to complex carving. Yet despite this diversity, in all of them, Vishnu is dressed in elaborate princely garb—with a crown, jewelry, garlands, and scarves—and radiates the balance and serenity that are among his salient characteristics. In many of the works, he is portrayed with the four objects he traditionally holds: a discus or wheel (chakra), a lotus, a conch shell, and a club-like weapon called a gada.

In addition to exhibiting portrayals of the god himself, “Images of Vishnu” also presented the key figures and objects with which he is associated. The half-man/half-eagle Garuda, on whom Vishnu rides as he swoops down to earth from the heavens, is depicted in a variety of sculptures and watercolors, while the lotus, a symbol of fertility and creativity, is represented by a sculpture of a pot-bellied figure—endowed with a sense of weight and substance that belies its small size—holding a lotus blossom in his hand (ca. 600). Other objects in this section include a conch shell intricately carved with avatars of Vishnu (twelfth century); bronze icons of the god’s discus, and exquisitely carved sandstone sculptures from the seventh and tenth centuries in which the god is flanked by his weapons in figural form.

Most Hindu gods have at least one wife, or consort, whose personality reflects and balances that of the god. Vishnu’s primary wife is Lakshmi, the goddess of wealth and good fortune and the principal focus of one section of “Images of Vishnu.” Found here is a range of works, including jewel-like watercolors with gold and silver—such as a charming nineteenth-century image of Lakshmi being bathed by elephants and one from about 1770 that shows the goddess massaging the foot of Vishnu, a gesture of humility and respect—as well as a graceful tenth- century carving that depicts Vishnu and Lakshmi within an elaborately carved arch.

Also represented here were Vishnu’s sister Durga, Hinduism’s most powerful and widely worshipped warrior goddess, seen in works including a superb late-tenth-century bronze, and other goddesses who are also potent female manifestations of the god.

Following “Images of Vishnu,” the exhibition moved on to an expansive section devoted to the god’s avatars. Although these figures share some of Vishnu’s characteristics, they are limited manifestations. Less glorious, with finite bodies, they sometimes display human weaknesses and are usually mortal. When Vishnu descends from the heavens in the form of an avatar, it is as if he were reaching down with his hand: the hand may be Vishnu, but it is not the god in full.

Hindu texts differ on how many times Vishnu’s avatars have come to Earth, but the most widely accepted number is nine, with a tenth anticipated at the time of the apocalypse. These are explored in “The Avatars of Vishnu,” which includes substantial sections devoted to Rama the king and Krishna the cowherd prince, as well as a diversity of sculptures and watercolors that illuminate Matsya the fish; Kurma the tortoise; Varaha the boar; Narasimha the half-man, half-lion; Vamana the dwarf; Parashurama the Brahmin; Balarama, the brother of Krishna; Buddha the prophet; and Kalki, the avatar yet to descend.

This section began with an introduction to the avatars as a group, shown in objects ranging from a two- sided stone plaque from the eleventh century that includes images of the ten primary avatars; to an early-eighteenth-century pendant that, although only about two inches square, also depicts the ten avatars; a fragment of a seventeenth-century textile made of dyed and undyed silk; and a variety of sculptures and watercolors.

Vishnu’s early, animal-form avatars are represented in an array of inventive imagery, including an eleventh-century stone image of the boar, Varaha, lifting the earth goddess on his elbow while she pats him on the snout, and a painting from about 1730 that shows Varaha trampling a demon. Narasimha the man-lion, Vishnu’s most aggressive and blood-thirsty manifestation, is represented in relatively placid form in a sixth-century sandstone image and with a fiery mane in a thirteenth-century sculpture.

Other highlights among the many works devoted to individual avatars included a rare freestanding bronze of Rama (ca. 975) and numerous manuscript paintings, spanning the years from the late seventeenth to the early twentieth centuries, depicting stories from his life in vivid color and minute detail. Also here are representations of Hanuman, the great monkey-general who is key to Rama’s many victories and who, over time, gained his own worshippers.

The charismatic Krishna, who is considered by many to be more than a mere avatar of Vishnu, is seen in objects that include the paintings Krishna and Radha in a Grove, ca. 1720, and Krishna Fluting for the Gopis, from around 1730 (the god is known for his moonlight trysts with gopis, or female cowherds); a late tenth–early eleventh-century bronze image of Krishna dancing on the serpent Kaliya, over whom he was victorious in battle; and two rasamandalas, or circles of delight, one bronze (1700–1900) and the other of embroidered cotton (late nineteenth century), which depict Krishna multiplying himself so that he can be alone with all of the gopis at the same time.

Vishnu: Hinduism’s Blue-Skinned Savior concluded with “Worshipping Vishnu.” Here, watercolor images of worshippers and the places in which they pray to Vishnu or his avatars, as well as a selection of ritual objects, provide an overview of some of the many Vaishnava rituals and sectarian traditions. Highlights include exquisite miniature objects made for use on domestic altars, including a gold throne and a silver and gold swing, both from around the nineteenth century. The throne is encrusted with rubies, emeralds, and pearls and topped by a delicate, fringed parasol while the swing was most likely used as a cradle for an icon of the infant Krishna (identifiable by the peacock figures at the top, representing Krishna’s peacock feather crown). It is accompanied by two T-shaped sticks that would have been used as pushers.

“Worshipping Vishnu” ended with a selection of objects from the modern era. Ranging from a twentieth-century papier-mâché pageant mask, to a selection of early-twentieth-century popular religious prints, to a pair of Bollywood posters, these demonstrate the enduring popularity of Vishnu and his avatars, as well as the ways in which Vaishnava traditions continue to evolve with the introduction of new media and new trends in devotional practice.

The Frist Art Museum gratefully acknowledges the Board of Trustees, the Vishnu Advisory Committee, and Friends of Asian Art for their support of this exhibition.