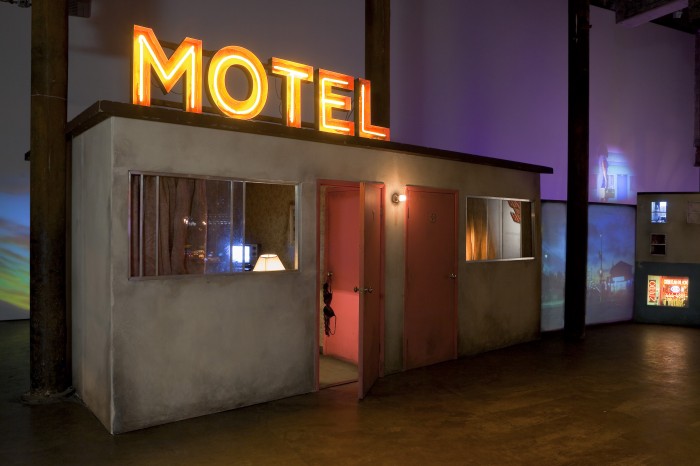 Tracey Snelling’s “Woman on the Run”

Tracey Snelling’s sculptures of rundown buildings on the outskirts of town show a keen sensitivity to the psychological tensions and hidden narratives of ordinary life. “Woman on the Run”—the artist’s most ambitious work to date—is composed of nearly life-sized facades, cardboard cutouts, comic strips, photographs, signs, and videos, accompanied by a soundtrack. The installation creates a cinematic setting for a classic whodunit. Casting herself in the starring role, Snelling plays Veronica Hayden, a woman sought for questioning by the police after her dark and shady husband Victor turns up missing. She flees the scene and begins assuming a series of new identities while drinking in dive bars and checking in and out of roadside motels, all the while looking over her shoulder and hiding behind a leopard-print scarf, wig, and sunglasses.

Snelling refers to her work as three-dimensional storytelling, and at the heart of it is a motel room we can enter. Clues strewn haphazardly around the room suggest Veronica has recently stayed there. Like detectives, we try to imagine and piece together her identity from her belongings and the mess she has left behind. Has she committed a crime, or is there more to the story than we will ever know? Snelling’s narrative leaves out as much as it leaves in, so that our own experiences and assumptions give it shape.