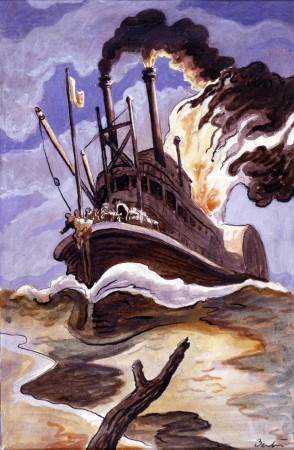 Visitors enjoyed a selction of Benton’s drawings and watercolors featured in many of beloved author Mark Twain’s classic books as well as works on Benton’s love of American music.

Like Grant Wood and John Steuart Curry, other major artists associated with the Regionalist movement, Thomas Hart Benton (1889–1975) believed that American folk culture, especially that found in the heartland, was more authentic than the “intellectual snobbery” of New York–based Modernists such as Alfred Stieglitz or Stuart Davis. Benton strove to pay homage to rural America’s people, history, and land by creating images that captured what he saw as the simplicity and dignity of everyday life in a more naturalistic manner than was popular in avant-garde circles. In the mid- to late 1920s, Benton turned away from the Modernist approach that he had adopted after studying in Chicago, Paris, and New York in order to explore the American experience through narrative subjects and a figurative style.

Eventually, after achieving success—and criticism—as an artist in New York, he returned to his home state of Missouri in 1934 to teach and work until his death in 1975.This exhibition presents works that were inspired by two aspects of American culture that Benton particularly admired: vernacular literature and music. The lively illustrations that he created to accompany limited-edition publications of Mark Twain’s The Adventures of Tom Sawyer in 1939, The Adventures of Huckleberry Finn in 1941, and Life on the Mississippi in 1944 are appropriate visual companions to these tales.

Like fellow Missourian Twain, Benton created his images with a raw, unvarnished tone, intending to present the quintessentially straightforward and unpretentious character of mainstream America. In addition to written narratives, Benton cherished American folk, or what he termed “hillbilly,” music found in areas of the Midwest and Southeast and often incorporated musicians and country ballads into his images. His final work, in fact, was the large-scale painting The Sources of Country Music, currently on view at the Country Music Hall of Fame and Museum in downtown Nashville.

This exhibition was presented in conjunction with the Nashville Public Library’s call for a city-wide celebration of beloved author Mark Twain.