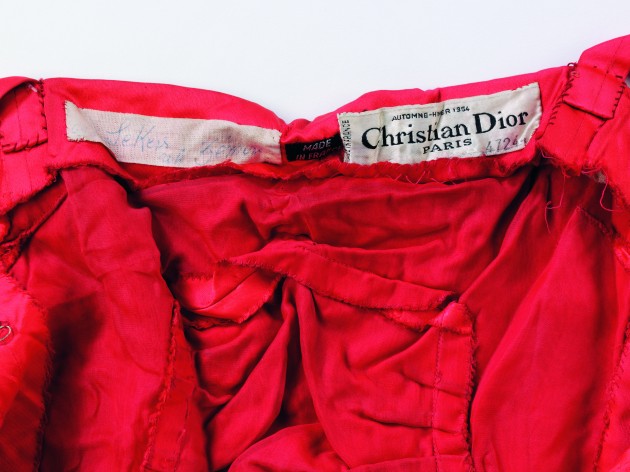 Through clothing, shoes, and photographs, this exhibition demonstrates how designers such as Dior, Balenciaga, and Chanel brought glamour back to Europe after World War II.

The Golden Age of Couture: Paris and London 1947–1957 is an exhibition that transported visitors to the most glamorous fashion houses of Paris and London in the years after WWII. This exhibition was organized by the Victoria & Albert Museum (V&A) in London, which possesses one of the finest costume collections in the world.

Following record breaking attendance at its launch in London and its subsequent presentations in Australia, Hong Kong and Canada, The Golden Age of Couture continued its international tour at the Frist Art Museum, the exhibition’s only venue in the United States, before traveling to Museums Sheffield in 2011.The exhibition celebrated an important decade in fashion history that began with the launch of Christian Dior’s famous New Look in 1947 and ended with his death in 1957.

The romantic postwar silhouette pioneered by Dior scandalized and delighted the public, and ushered in a period of remarkable creativity. Dior himself called it a “golden age” for haute couture. He and his contemporaries set a standard for impeccable workmanship and design that has rarely been surpassed since.In addition to Dior, the exhibition highlights the work of such luminary Paris designers as Cristóbal Balenciaga, Hubert de Givenchy, and Pierre Balmain and celebrated London designers including Hardy Amies, Charles Creed, and Norman Hartnell.

Included were examples of daywear, cocktail dresses, and evening gowns designed for royalty and aristocracy.

Photographs by Cecil Beaton, Richard Avedon, and Irving Penn showed how images in fashion magazines enhanced the prestige of couture, while also making its innovative ideas widely known and accessible in America as well as Europe.

The V&A tracked down and purchased several couture garments especially for this exhibition. One is a Givenchy blue cape (1957), identical to the one worn by Audrey Hepburn in Funny Face. Another exciting find is a red version of Dior’s glamorous Zemire (1954). The bodice and long jacket with full length skirt, previously known only through archive photographs, was recently discovered in a cellar near the River Seine in Paris and has been cleaned and repaired for the exhibition.

Paris’ reputation for high fashion began in 1858 when British dressmaker Charles Frederick Worth opened his prestigious fashion house in Paris with the goal of unifying design and fabrication under one roof. The production of couture was based on the division of labor and almost entirely a handcraft industry.Separate in-house workshops for tailoring and dressmaking were supported by the luxury trade of handmade accessories and trimmings such as feathers, embroidery, beading, and ribbon work that was supplied by specialists throughout France.

At the turn of the century, the Parisian couture trade quickly began to flourish. The Chambre Syndicale de la Couture Parisienne was formed to regulate the increasing number of houses. By 1938, there were 70 registered houses varying in status and importance; each was distinguished by its designer and gained social value based upon the fashion of French women.The industry was disrupted by the wartime occupation of Paris.

Towards the end of the war, couturiers created Théâtre de la Mode—small dolls dressed in the latest styles and set in arranged scenes, or tableaux, designed by artists such as Christian Bérard and Jean Cocteau.

The first part of the Frist Art Museum exhibition displayed a small sampling of the Théâtre, which originally toured to Scandinavia, Britain, and the USA between 1945 and 1946 to raise funds for war victims and to promote French fashion. After the war, on February, 12, 1947, Dior launched his couture house and became an overnight sensation. The exhibition traced how Dior, who once likened couture to marriage in the way design and material with its instances of perfect harmony mixed with a few disasters, created the most successful fashion business model of the 20th century through advertising, licensing, perfume, and publicity.Dior’s voluptuous collection was the antithesis of masculine wartime fashion. His designs featured sloping shoulders, full bust, and a cinched waist above long, full skirts.

Carmel Snow, editor-in-chief of American Harper’s Bazaar, was quick to call it the “New Look” because it was so different from all that came before it.

The Paris couture system set a template for London couturiers, and with the creation of the Incorporated Society of London Fashion Designers in 1942, the small community of fashion houses gained increasing recognition. Many British designers were trained in Paris; John Cavanagh, for example, worked with both Edward Molyneux and Pierre Balmain before returning to establish his own London business. Although London could not compete in terms of output, its fashion and textile industry became increasingly profitable.

During the postwar period, Paris’ dominance was challenged as increases in material and labor costs and higher taxes put pressure on couturiers. However, for France the couture industry remained vital to the economy with Dior alone providing five percent of the country’s national export revenue in 1949.A section of the exhibition will focus on handcraft and techniques, with undergarments and the insides of dresses on display.

To enrich the content of the exhibition, photographs, documentary film, textiles and archival material were also on view.

The exhibition closed with a look at the state of haute couture today.

Dior’s death in 1957 brought an end to the golden age of couture as fashion moved from the fitting rooms and ateliers into boutiques. Even so, the legacy of artistry and craftsmanship still thrives in the remaining grand houses of Paris.

Download a copy of The Golden Age of Couture Gallery Guide.

The exhibition broke all attendance records at the V&A when it opened in 2007. As the Frist Art Museum is the only U.S. venue for The Golden Age of Couture.

The Victoria & Albert MuseumThe Victoria and Albert Museum in London is the world’s largest museum of decorative arts and design. Named after Queen Victoria and Prince Albert, the museum was founded in 1852, and its massive collections include more than 5,000 years of art and design from all over the world. The museum was conceived by Prince Albert as a way to improve the standards of British design by making examples of fine decorative arts and design available for viewing and study.The Victoria and Albert Museum is divided into four major Collections departments: Asia; Sculpture, Metalwork, Ceramics & Glass; Word & Image and Furniture, Textiles and Fashion. Together, the four major collection areas contain more than 6.5 million objects.

The V&A holds one of the finest collections of fashionable dress in the world featuring suits, cocktail dresses and evening gowns accompanied by a superb archive that have been specially conserved and displayed to provide a unique window into postwar Paris and London couture.

Exhibition organized by the Victoria and Albert Museum, London.