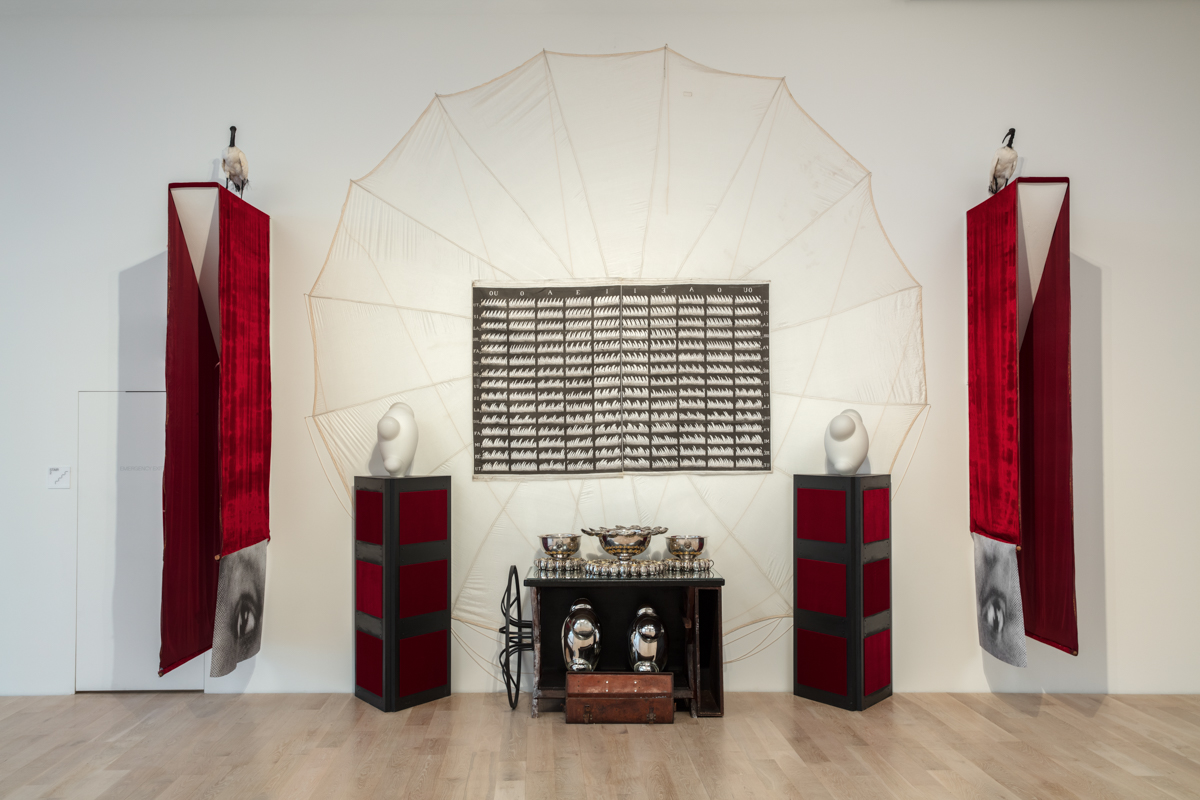 The Frist Art Museum and Fisk University Galleries presented Terry Adkins: Our Sons and Daughters Ever on the Altar, concurrent presentations of sculptures, prints, installations, and video by the multidisciplinary and multimedia artist and musician, in the Frist’s Gordon Contemporary Artists Project Gallery and the Carl Van Vechten Gallery at Fisk from February 20, 2020, through January 3, 2021. Presented forty-five years after Adkins’s graduation from Fisk, the exhibition paid special attention to the influence that his time in Nashville had on the late internationally acclaimed artist.

“This is the first exhibition of its kind of Terry Adkins’s work in Middle Tennessee, and we are excited to partner with the Frist Art Museum to co-present it,” said Director and Curator of Fisk University Galleries Jamaal Sheats. “A Fisk University alum, Adkins was a member of the jazz orchestra and a disc jockey for WFSK Jazzy 88 radio station. However, the Fisk Art Department was his home. He studied under the then chairman of the art department and director of galleries, historian, and artist David Driskell. Adkins has credited Aaron Douglas, who founded the art department 75 years ago, as igniting his interest in art. Today, I see Adkins’s work and career as a beacon for the arts tradition at Fisk.”

Terry Adkins (1953–2014) was principally interested in the intersection of visual art, music, and African American history. First trained as a musician on guitar, saxophone, and other woodwinds, he approached his visual art practice from the perspective of a composer, often arranging series of works to create what he called “recitals,” many of which feature modified musical instruments or other salvaged materials. “One of his primary aims was to forge a link between music and art, reversing each discipline in order to make sculpture more ethereal and music more concrete,” said Frist Art Museum curator Katie Delmez.

Throughout his career, Adkins also questioned the processes by which historical figures’ pasts become or do not become a part of the historical canon. “He mined African and African American histories for marginalized narratives and organized series of works devoted to either underrecognized figures or highlighted underrepresented aspects of well-known figures’ lives,” said Delmez. The works in Our Sons and Daughters Ever on the Altar paid tribute to the legacies of several influential and enigmatic figures, such as Jimi Hendrix, Bessie Smith, Dr. George Washington Carver, and Dr. W.E.B. Du Bois.

On view at the Frist Art Museum

The “recital” Principalities was dedicated to Jimi Hendrix and his service as a paratrooper in the 101st Airborne Division of the U.S. Army at nearby Fort Campbell, Kentucky. A centerpiece of the series, Cloud, comprised a white parachute hung above a rack of kimonos. Referencing the Hiroshima and Nagasaki bombings, it underscored the tragic history of war. Flumen Orationis, a video pairing Hendrix’s 1970 anti-war protest song “Machine Gun” with Dr. Martin Luther King Jr.’s 1967 speech “Why I Am Opposed to the War in Vietnam,” was also featured.

Another “recital” on view at the Frist titled Belted Bronze was devoted to legendary blues singer Bessie Smith, who was born in Chattanooga. Though successful during her lifetime, Adkins felt her accomplishments lacked sufficient public acknowledgment after her untimely death at the age of forty-three. The installation featured multiple components meant to channel Smith’s opulence, strength, and majesty. Columbia, a large record-shaped sculpture, refers to both the label Smith was signed to in 1923 and the type of record (Columbia 78s) on which her music was recorded and played.

On view at Fisk University Galleries

The presentation at the Carl Van Vechten Gallery relayed the significant impact that Fisk had on Adkins. His father was a graduate of the university, and his uncle was a former president. “As a student, Adkins studied with Stephanie Pogue and had seminars with Robert Blackburn and Fred Bond before graduating with a Bachelor of Science degree in art with a concentration in printmaking,” said Sheats. “The presentation at Fisk explores Adkins’s works on paper, the medium in which he revisits and shifts the perspective of the lives and works of iconic figures in American history.” Adkins demonstrates this ability through bodies of works derived from scientist and inventor George Washington Carver and sociologist, historian, and civil rights leader W.E.B. Du Bois, in the Progressive Nature Studies and The Philadelphia Negro Reconsidered, respectively.

Another highlight at Fisk was Darkwater Record, which features a porcelain bust of Mao Zedong sitting on five recorders playing excerpts of W.E.B. Du Bois’s “Socialism and the American Negro” speech. Du Bois is an 1888 graduate of Fisk University and met Chairman Mao in China in 1959.

Adkins continued to be inspired by people and artwork he was exposed to at Fisk throughout his career, including explorer Matthew Henson, whose portrait by Winold Reiss still hangs in the John Hope and Aurelia E. Franklin Library on campus. Also on view at Fisk were prints of x-rayed memory jugs—African American funerary objects often created by Southern sharecroppers as headstones. They were made of clay and included objects from the person’s life. Adkins collected over 120 of these and worked with colleagues in the medical school of the University of Pennsylvania (where Adkins taught for many years) to make these photographs by x-raying them.

Adkins often claimed that the foundation of his career began in Nashville, where his interest for the visual arts was nourished at Fisk. There he studied under artists Martin Puryear, Stephanie Pogue, Carlton Moss, and Earl Hooks, and he was mentored by Aaron Douglas, an influential artist during the Harlem Renaissance. Born into a segregated America, Adkins felt a call to take up the torch that Douglas and others passed on to him, and he strove to create art that reflected the tenor of the times and served as instruments of change.

Organized by Fisk University Galleries and the Frist Art Museum

This exhibition was supported in part by an Art Works grant from the National Endowment of the Arts.

Terry Adkins: Our Sons and Daughters Ever on the Altar

Terry Adkins: Our Sons and Daughters Ever on the Altar

Terry Adkins Conceived His Exhibitions as a Conversational Interplay Among Objects, Installations, and Musical Performances

Exhibition on view at the Pulitzer Arts Foundation

“Terry Adkins: Our Sons and Daughters Ever on the Altar”