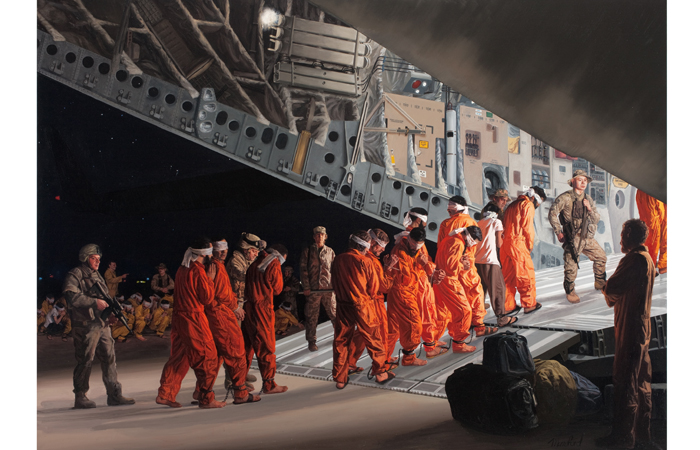 From 2003 until 2013, artist Steve Mumford travelled to war zones in Iraq and Afghanistan, as well as to the U.S. military prison at Guantanamo Bay Naval Base, to create artworks documenting the experiences of American troops, civilians caught in the conflict, and prisoners being held at Guantanamo. In an effort to understand the nature of war from a variety of perspectives, Mumford captured what he calls “the spaces in between,” the long periods between combat in which soldiers and civilians strive to maintain a feeling of normalcy and community-building in the face of pending trauma. The resulting watercolors, sketches and paintings offer unflinching depictions of the extremity of sacrifices made—willingly and unwillingly—in the name of national ideology.

Baghdad Journals
With little more than art supplies and a press pass from artnet.com—which allowed access to restricted areas and proximity to troops—Mumford first entered Iraq from Kuwait on April 15, 2003, approximately one week after Baghdad had fallen to American forces. Mumford stayed for five weeks on his first trip, and returned often over the next eight years, creating in-depth journals of his travels. Some of these writings, sketches, and watercolors, known as “Baghdad Journal,” were presented in installments through artnet.com, a selection of which is available here.

This exhibition contains graphic depictions of war and may not be suitable for all audiences.

The images from Goya: The Disasters of War and Steve Mumford’s War Journals, 2003-13 depict scenes of war and conflict. Some of the images will be disturbing, but all serve to remind us that both inhumanity and humanity can result from times of conflict and ultimately, the aftereffects of war touch us, all.

The Frist Art Museum has been privileged to work with the Clarksville-based SAFE: Soldiers and Families Embraced, an organization that works diligently to assist the mental health community to offer free, confidential counseling and support to service members, Guard and Reserve members, veterans and military families. SAFE is staffed by counselors and social workers who have training specific to the needs of the military. Additional information can be found at www.thesafenetwork.org.

soldiersheart.net
Developed by Edward Tick, Ph.D. and Kate Dahlstedt, LMHC, provides a unique and comprehensive model to address the emotional, moral, and spiritual wounds of veterans, their families and communities. It offers a genuine healing and homecoming from Post Traumatic Stress Disorder by developing a new and honorable warrior identity supported by community.

maketheconnection.net/conditions/ptsd
Hear honest and candid descriptions from Veterans of what life was like for them with PTSD. A variety of Veterans—men and women, younger and older—share their emotions, actions, and symptoms; how they learned they had PTSD; and what they did to get on a path to recovery.

aacap.org/AACAP/Families_and_Youth/Facts_for_Families
Published by the American Academy of Child & Adolescent Psychiatry, this link discusses the roles and feelings of the returning family member, the caregiver that stayed home, the children and the family as a whole.

sesamestreet.org/parents/topics/stress/stress01
By Sesame Workshop. The site offers advice on how to talk with children about tragedy and when to seek professional help.

ptsd.va.gov/public/PTSD-overview/reintegration/index.asp
From the National Center for PTSD, United States Department of Veterans Affairs 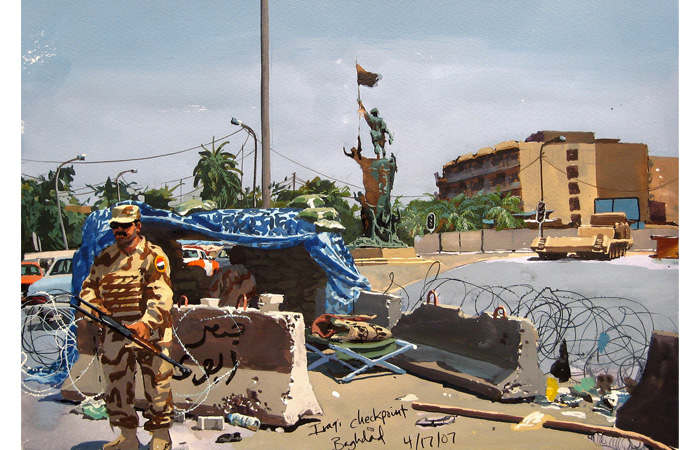 Steve Mumford. A typical Iraqi checkpoint in Baghdad in 2007 as the US raced to get Iraqi forces in place. It seemed to me that what the Iraqis lacked in finesse, they often made up for in boldness, 2007. Ink, watercolor, and gouache on paper. Courtesy of the artist and Postmasters Gallery, New York. © Steve Mumford 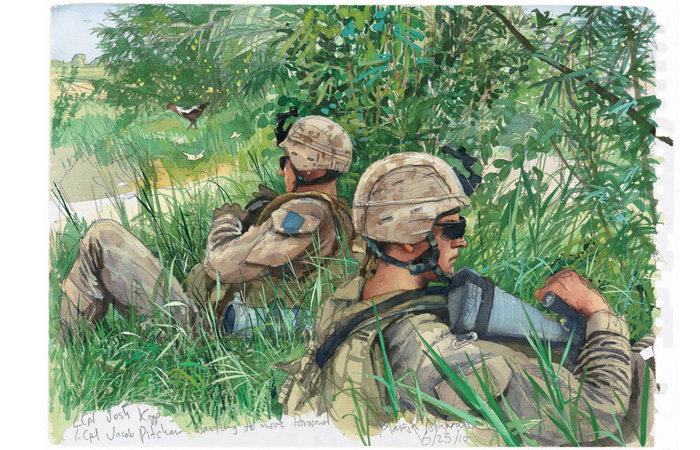 Steve Mumford. Far from relaxed, these Lima Co, 3/6 Marines on a patrol out of Camp Coutu, Marja, are watching for insurgent activity while an Explosives and Ordinance Demolition team defuses a large improvised explosive device meant for our patrol, 2010. Pencil and watercolor on paper. Courtesy of the artist and Postmasters Gallery, New York. © Steve Mumford