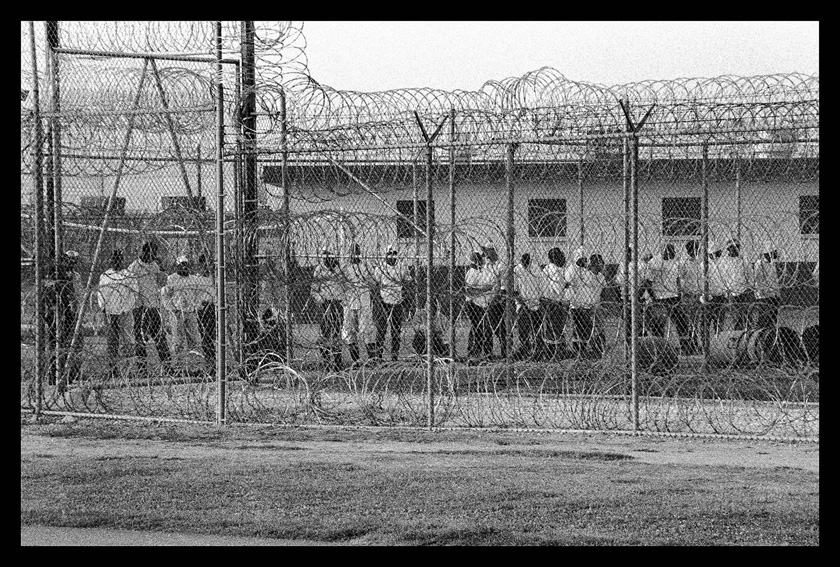 New Orleans natives Keith Calhoun and Chandra McCormick have been documenting African American life in Louisiana for more than 30 years. Since 1980, they have made regular visits to the Louisiana State Penitentiary at Angola to photograph life on the prison farm, which was founded on the consolidated land of several cotton and sugarcane plantations. Their poignant black-and-white images record the exploitation of the men incarcerated within the maximum-security prison farm while also showcasing the prisoners’ humanity and individual narratives. The husband-and-wife team’s work has been exhibited at the Venice Biennale. Calhoun and McCormick use their cameras as tools for social engagement, reminding their audiences of persistent racial inequities, especially throughout the American criminal justice system.

The Frist Art Museum will produce a hardcover book titled Louisiana Medley: Photographs by Keith Calhoun and Chandra McCormick about the couple’s work. Published by Lucia∣Marquand, the book will include 70 plates, a foreword by Dr. Deborah Willis, chair of the Department of Photography & Imaging at the Tisch School of the Arts at New York University, a career overview by Frist Art Museum executive director and photography historian Dr. Susan H. Edwards, and an essay by Dr. Makeda Best, Richard L. Menschel Curator of Photography, Harvard Art Museums, that places the images of Slavery, the Prison Industrial Complex in the context of other prison photographs.

FROM THE GALLERY GUIDE

Keith Calhoun and Chandra McCormick have been photographing life and labor practices at the Louisiana State Penitentiary for more than three decades. The prison was once a plantation and is known as Angola, the country of origin for many of the slaves. (Incidentally, Nashvillian Adelicia Acklen inherited the property from her first husband in 1845 and owned it until 1880.)1 At 18,000 acres, the complex is bigger than the island of Manhattan and operates as the largest maximum-security prison in the United States.2 It is also called “The Farm” because it continues to grow cash crops—as much as four million pounds a year—using inmate labor. The 13th Amendment to the US Constitution, which prohibits involuntary servitude, does not apply to convicted inmates. In the minds of Calhoun and McCormick, slavery never really ended at Angola.

Angola currently houses more than six thousand male inmates; around 75 percent are African American.3 When one looks at contemporary photographs of black bodies in the fields, one may wonder if they are descendants of those who worked on the plantation in the nineteenth century. As first-hand witnesses to exploitative labor practices, Calhoun and McCormick are committed to bringing attention to how incarceration, which has more than quadrupled in the United States since 1980, can fuel and abet capitalism. The problem is complicated further because the economic welfare of local communities largely depends on the penal system for civilian employment.

Calhoun and McCormick’s intimate understanding of prison culture has informed their activism not only on behalf of individuals directly involved with correctional facilities, but also at home. In their New Orleans community, the husband-and-wife team’s crime prevention extends to offering alternative, constructive options for at-risk youth. In their hands, cameras become tools of social justice and a powerful means of connection and communication. Their visual messages are echoed in the song “Angola Bound,” written by their friends Charles and Aaron Neville, which tells the story of how the wrong turns in life can lead a man into working harder than a mule in Angola.

Since 1965, Angola inmates have been allowed to participate in the prison rodeo—at their own risk, of course. Patrons pay admission and often buy arts and crafts made by inmates. The proceeds do not accrue fully to the prisoners, however. The spectacle recalls how gladiators entertained the public in the Colosseum in ancient Rome. Those fighters could be given freedom by a pleased emperor, but Angola inmates cannot be rewarded with pardons when they deliver remarkable performances at the rodeo.

From time to time, an inmate leaves Angola, temporarily or permanently. Calhoun and McCormick have photographed inmates released to attend a family funeral. Prisoners are pictured shackled in chains, sitting or standing with their loved ones for bittersweet reunions. On two occasions, the artists have been on hand when exonerated inmates were released. Calhoun and McCormick recorded the departures, adding video documentation to their oeuvre. Resentment and the heartbreak of having lost time and freedom engender a complex set of emotions for the innocent.

The photographs of Calhoun and McCormick are not marked by rancor or righteous indignation. Rather, the artists’ expressions of social protest are imbued with humility and encourage you to consider the full humanity of their subjects. In the African American tradition of call and response, they issue the call, inviting us to engage in conversations about justice, bias, labor practices, and the social costs of mass incarceration.

NOTES
1. Acklen sold the property to a former Confederate major who leased inmates from the state to work the plantation. The facility officially became a state prison in 1901.

2. Jeffrey Goldberg, “The End of the Line: Rehabilitation and Reform in Angola Prison,” Atlantic, September 9, 2015, theatlantic.com. 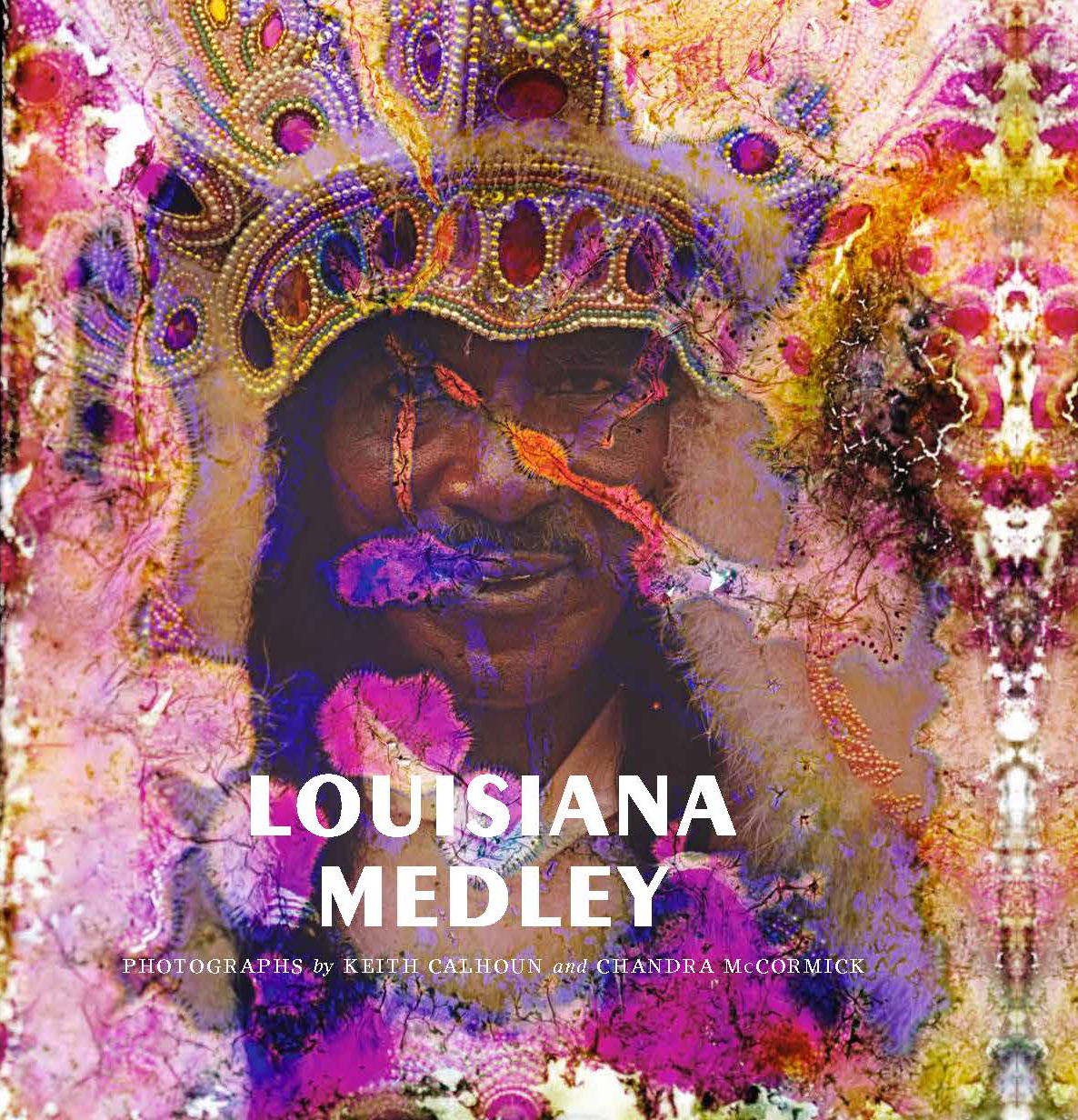 Exhibition Catalogue
An accompanying catalogue, Louisiana Medley: Photographs by Keith Calhoun and Chandra McCormick, is available in the Frist gift shop or by calling 615.744.3990. 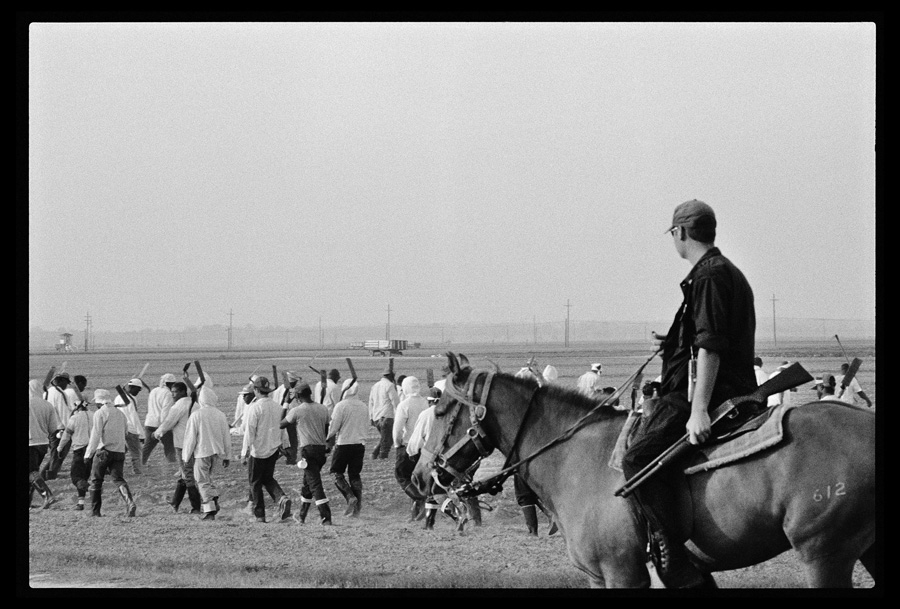 Keith Calhoun. WHO’S THAT MAN ON THAT HORSE, I DON’T KNOW HIS NAME, BUT THEY ALL CALL HIM BOSS, 1980. Archival pigment print. Courtesy of the artist. © Keith Calhoun 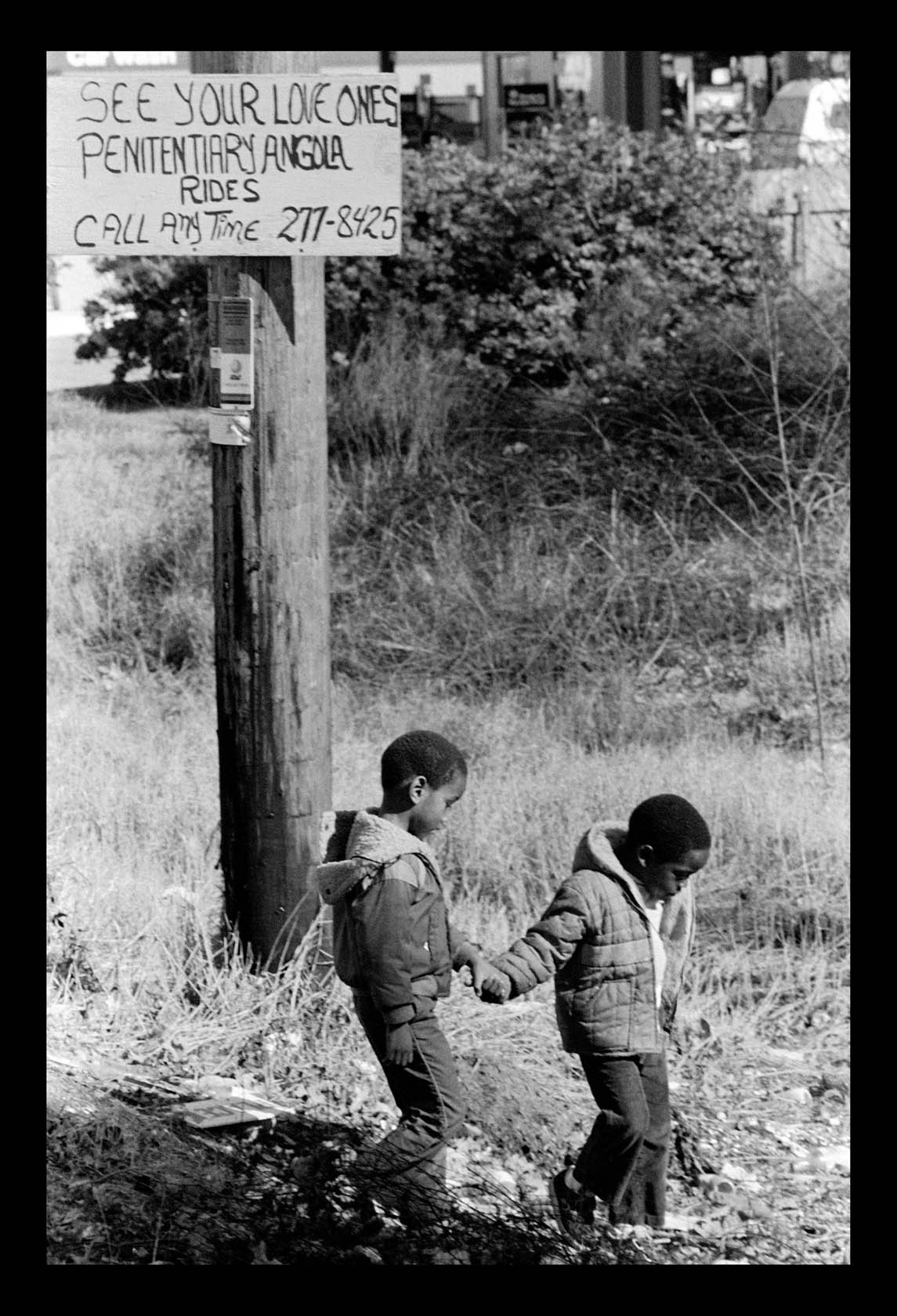 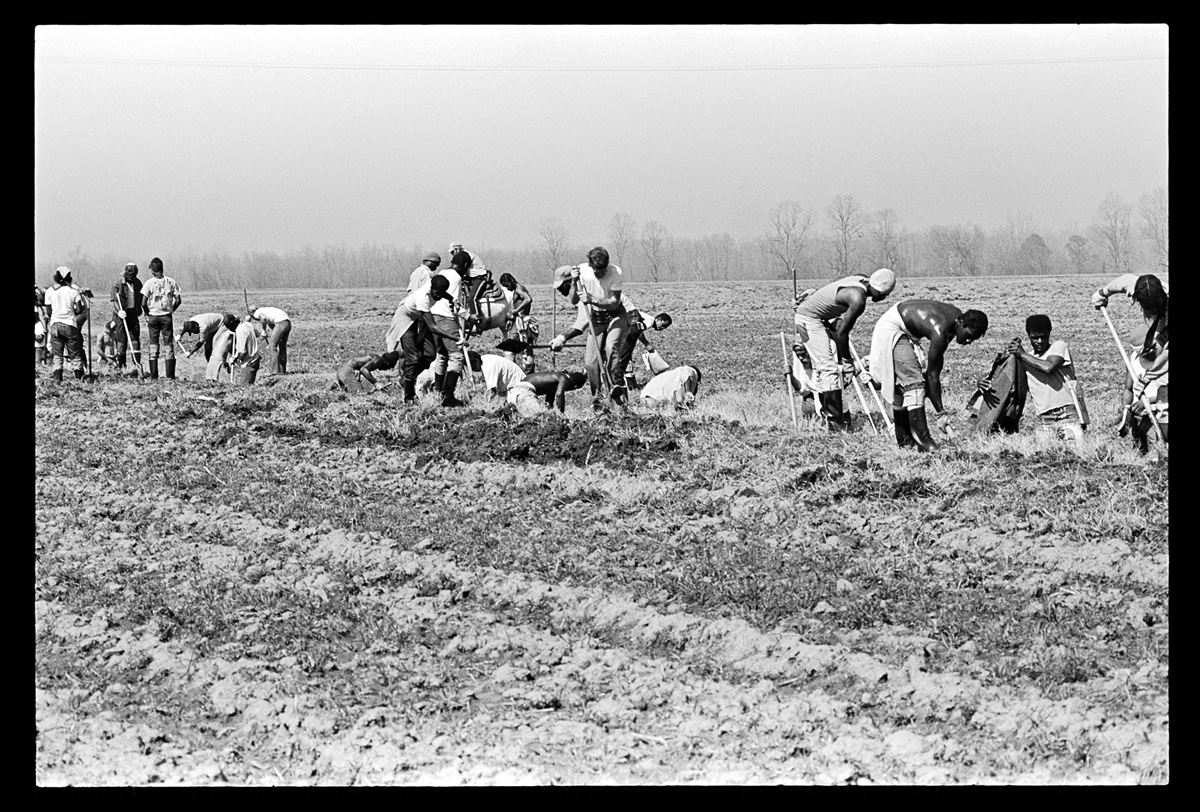 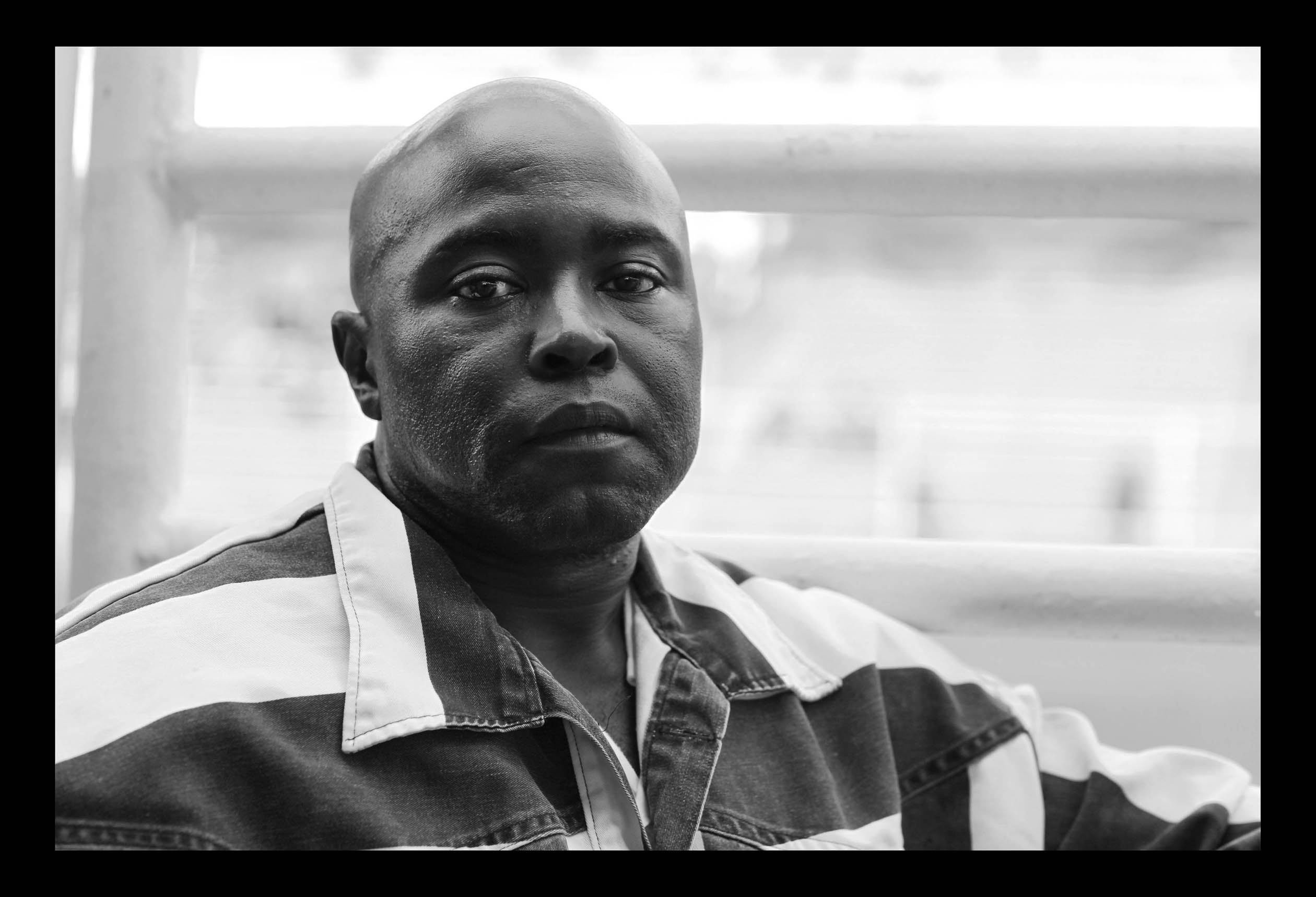 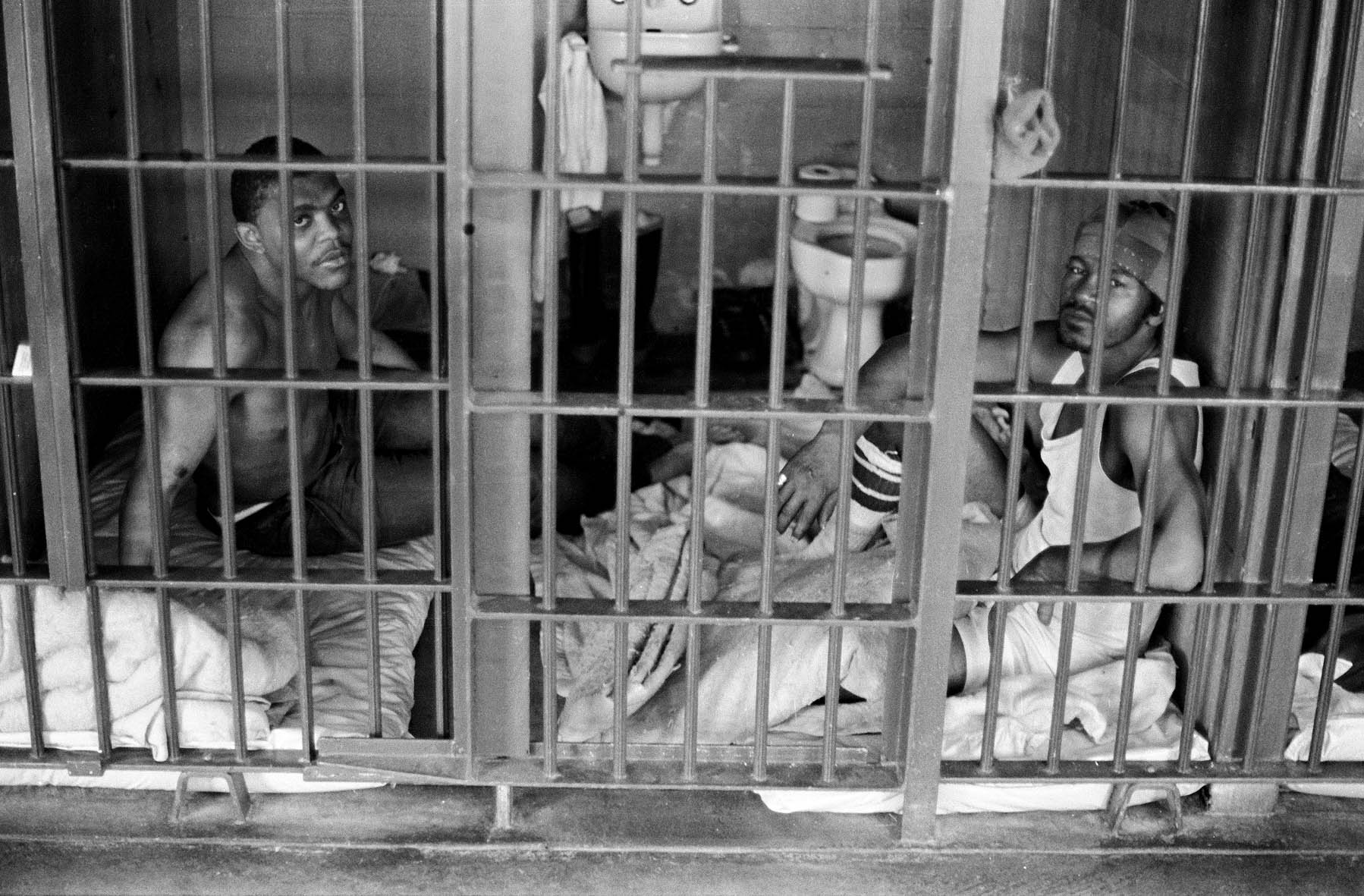 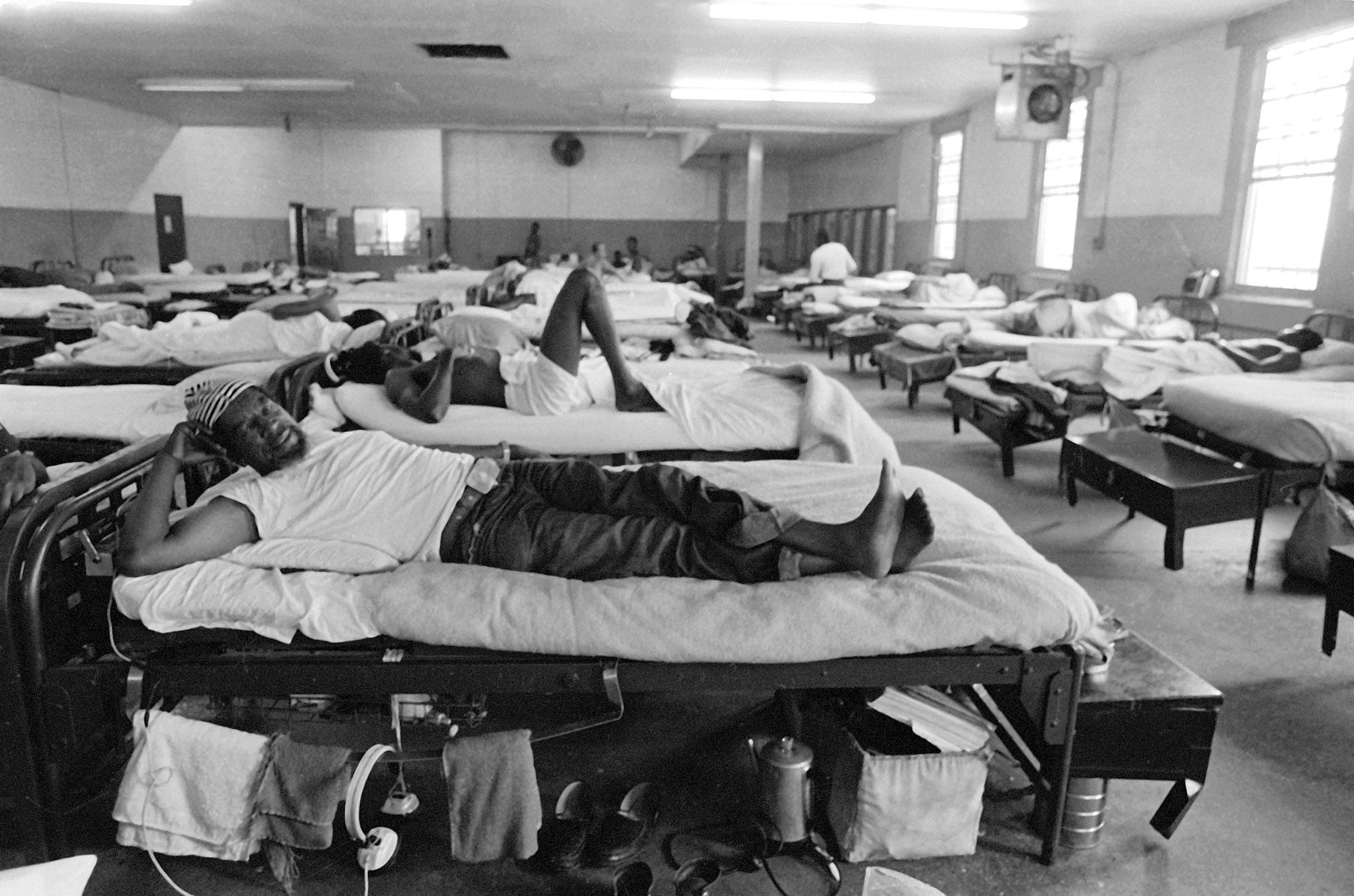 Keith Calhoun. AN ANGOLA DORMITORY FOR INMATES CAN HOUSE AS MANY AS 100 TO 200 MEN, 1981. Archival pigment print. Courtesy of the artist. © Keith Calhoun 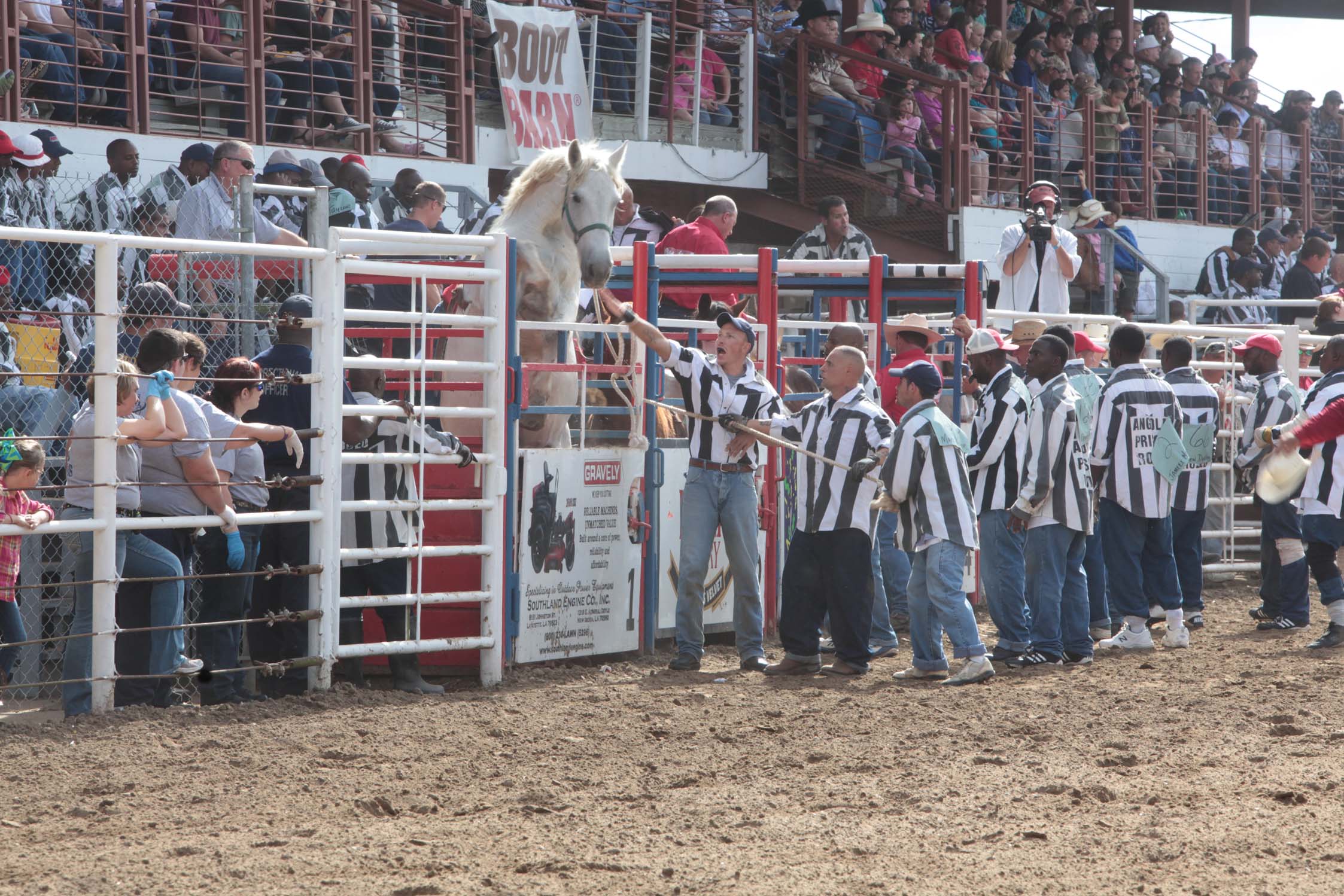 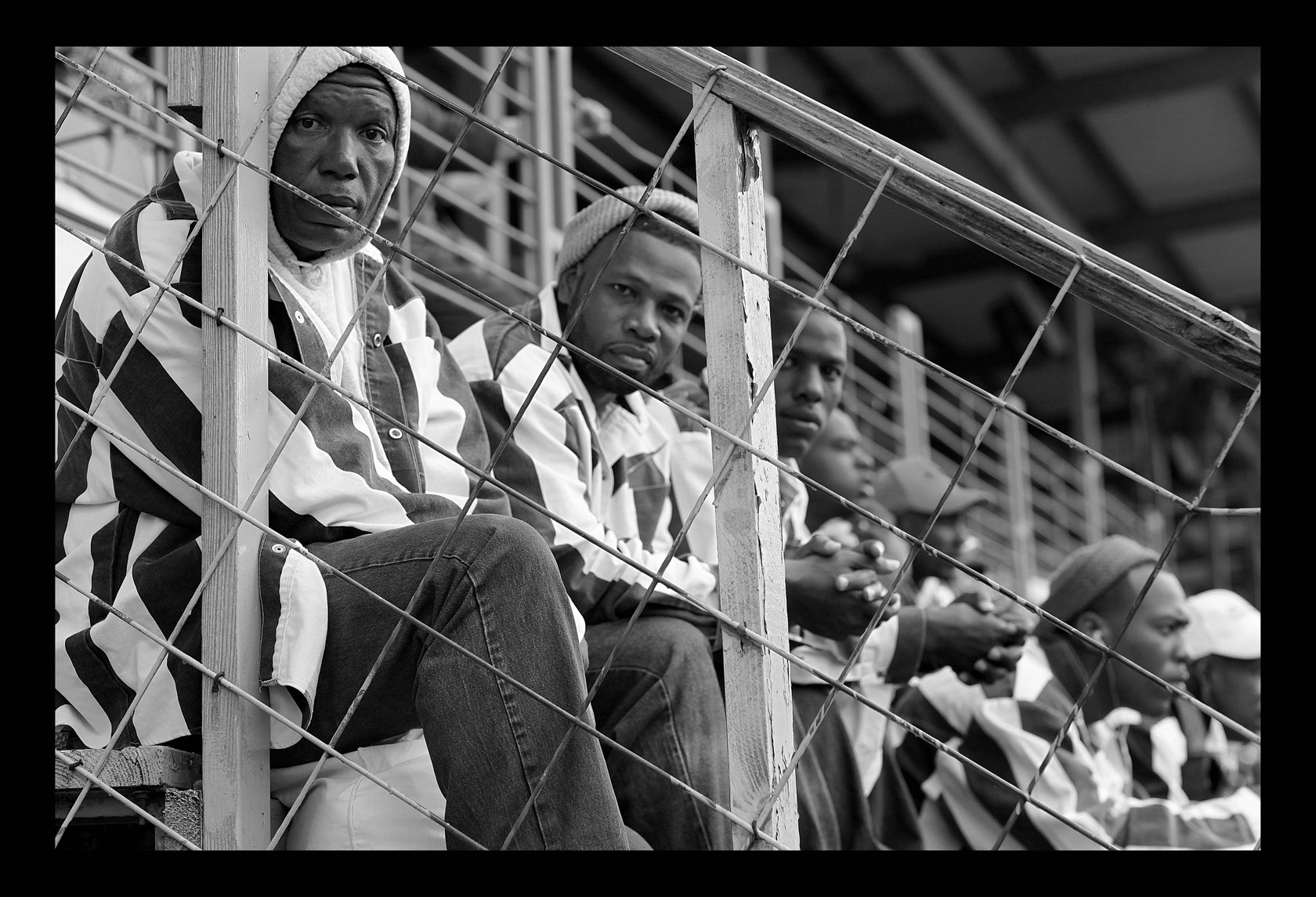 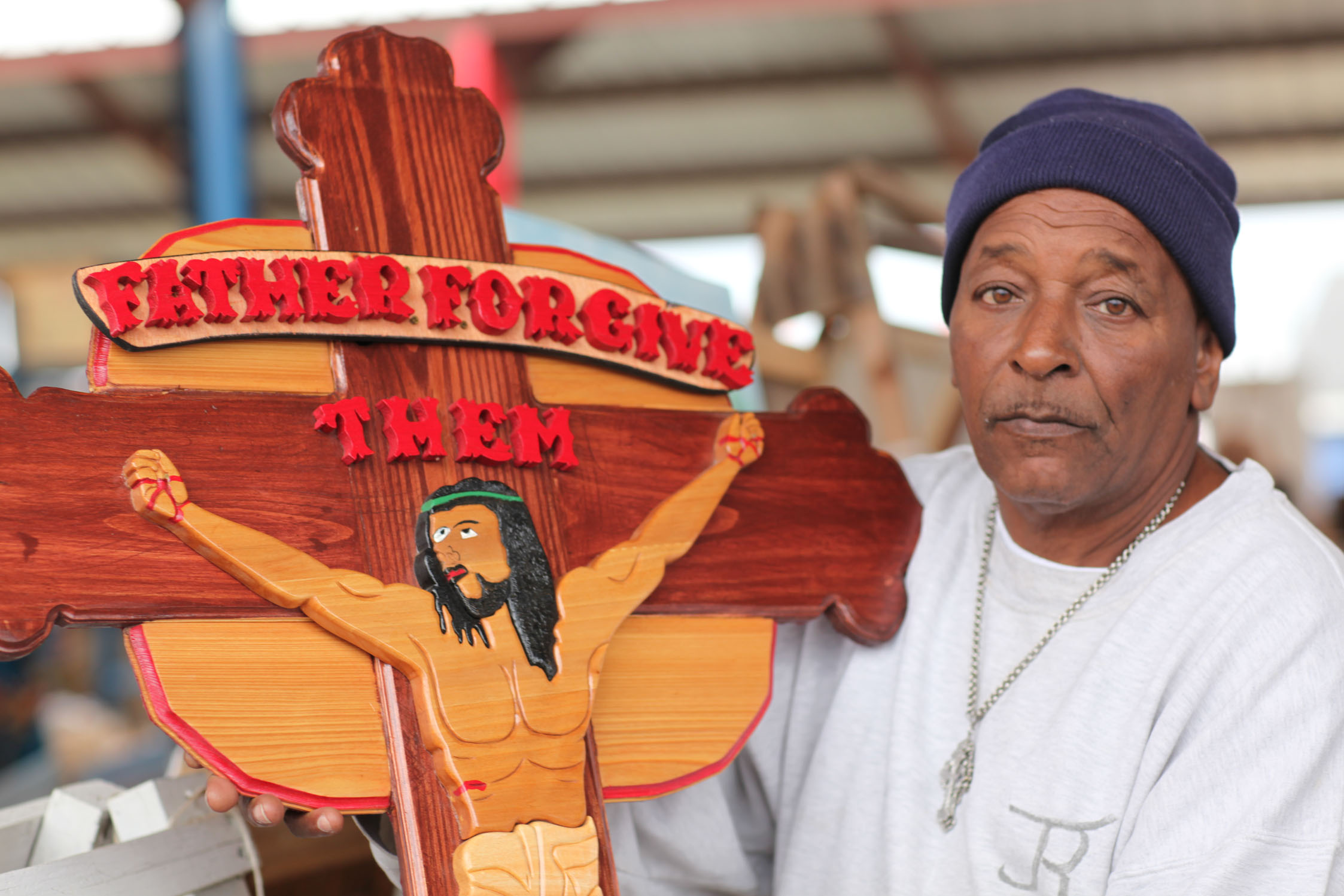