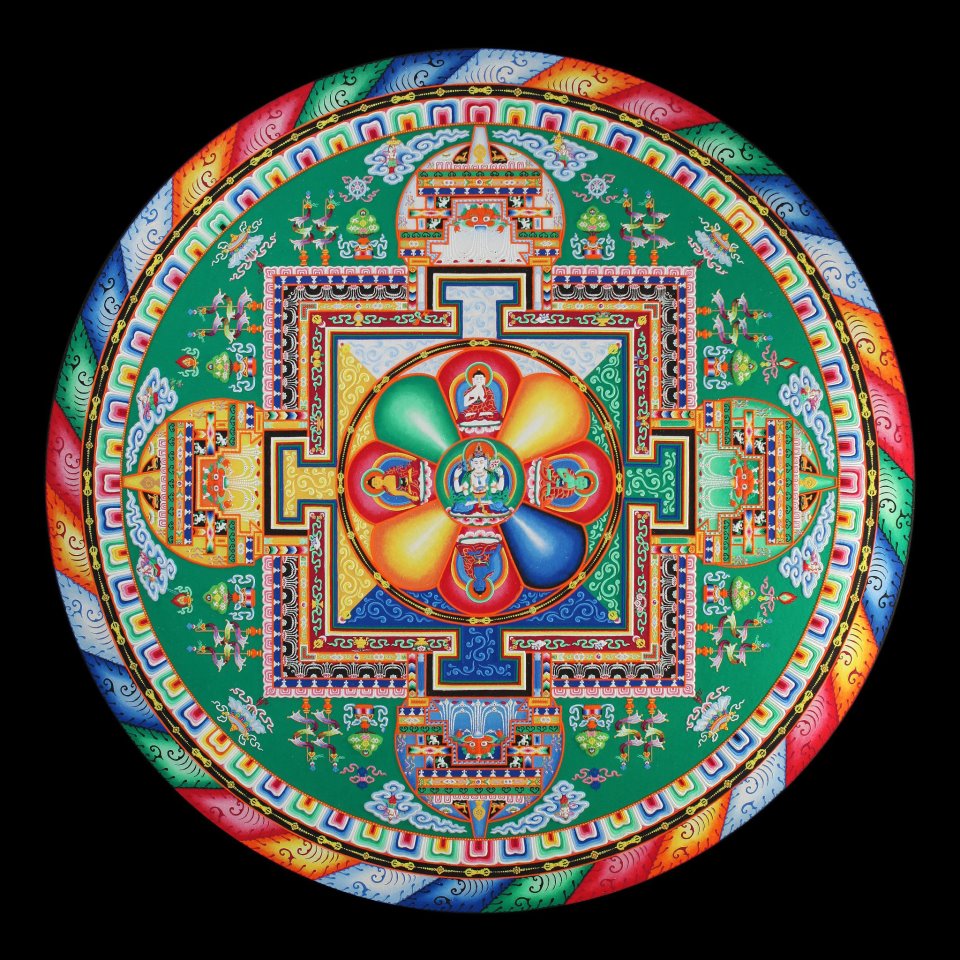 This gallery contains a completed mandala of Avalokiteshvara, the Bodhisattva of Compassion. Tibetan monks from Drepung Loseling Monastery constructed the mandala with colored sand over the course of five days (February 10–14, 2017). It will remain in place until May 7, 2017, when the monks will return to ritually destroy it. You are invited to attend this beautiful ceremony, which symbolizes the transience of life central to Buddhist philosophy. Scroll down this page to see the details for the closing ceremony.

Mandalas are circular designs that are intended to represent the universe or a cosmic order. The making of temporary sand mandalas is an expression of devotion unique to Tibetan Buddhism. This mandala is a diagram of Avalokiteshvara’s celestial palace. As the monks filled in the mandala, they translated their internal meditations on the deity into this physical work of art. The ritual and resulting mandala invoke the limitless understanding of Avalokiteshvara and bring healing and well-being to all who see them.

The physical sand mandala in this gallery is only one part of a larger ritual. The ceremonies, chanting, meditations, and creative activities performed before, during, and after its construction are all equally important.

Sand mandala rituals include these steps:

1. Purification of the Space
The space in which a sand mandala is to be created must first be purified. This ceremony includes making offerings to the central deity of the mandala, exorcizing hindering spirits, and blessing the ground by dancing around the mandala surface. Certain phases of the preparatory ritual are accompanied by the chanting of religious mantras and by music.

2. Drawing of the Lines
Mandalas are based on a precise grid of lines that are oriented to the cardinal and ordinal directions. The lines cannot be drawn freehand. Monks coat a cord in white chalk and stretch it out from the center across the north/south and east/west axes and the NE/SW and NW/SE axes to create the eight principal lines of the mandala. The nesting squares and circles of the central deity’s celestial palace are then drawn over the directional lines.

3. Invocation of the Deities
The sections of the mandala that will house various deities are purified with saffron water. Afterward, a monk, holding a vajra (ritual scepter) and a ghanta (bell), carefully places a grain of barley on the mandala and recites a mantra to attract each deity to its proper location. The monks visualize the completed composition during this invocation and thus empower the mandala before it is created in sand.

4. Coloring of the Mandala
Filling in the mandala is the last phase of preparation. Four monks, each seated at a directional quadrant, work in unison to fill in the mandala with red, green, yellow, blue, orange, white, and black sand. They work from the center of the mandala to the periphery while meditating on the various parts of the composition. Each monk holds a chak-pur (tubular funnel) in one hand, while the other hand runs a metal rod over the chak-pur’s grated surface. This produces a vibration that causes the sand to flow like liquid. No glue is used to hold the sand in place.

5. Destruction of the Mandala
Sand mandalas are traditionally destroyed shortly after their completion, but this one will remain on view until May 7. The destruction of a sand mandala is a metaphor for the impermanence of life and a means of releasing its healing power. During the closing ceremony, the sand is swept up and placed in an urn. The sand is carried to a nearby body of water, into which it is deposited. The waters then carry the blessing of the central deity to the ocean, and from there it spreads throughout the world.

The Frist Art Museum is thrilled to welcome back the Mystical Arts of Tibet, a touring company of monks from Drepung Loseling Monastery (exiled from Tibet and currently based in South India). Their sand mandala ritual will conclude our Free Family Festival Day.

The closing ceremony will take place in the Frist Art Museum’s Ingram Gallery. The monks will dismantle the mandala, sweeping up the colored sand to symbolize the impermanence of all that exists. The rite will be accompanied by multiphonic chant and music. It will last approximately 30 minutes.

UPDATE ABOUT CLOSING CEREMONY: Due to the large crowds expected in downtown Nashville for the Nashville Predators playoff game at Bridgestone Arena Sunday afternoon, we are advised by city officials that the procession to the Cumberland River originally planned as part of this ceremony, cannot take place. The entire ceremony WILL instead take place inside the Frist Art Museum. (Go Preds!!)

Q. Where can I watch the closing ceremony at the Frist Art Museum?
A. Ingram Gallery will be open to the public, but space is limited. The ceremony will also be broadcast live in the auditorium to accommodate more people. Groups with strollers are asked to watch the ceremony from the auditorium.

Q. May I take pictures?
A. Yes. Take as many pictures as you want, but please turn off your flash.

Q. May I take some of the sand home?
A. No. The sand will be distributed to Frist Art Museum Sustaining Community Partners to spread the blessings of the mandala across Nashville. These partners include:

Watch Tibetan monks from Drepung Loseling Monastery construct the mandala with colored sand over the course of five days. 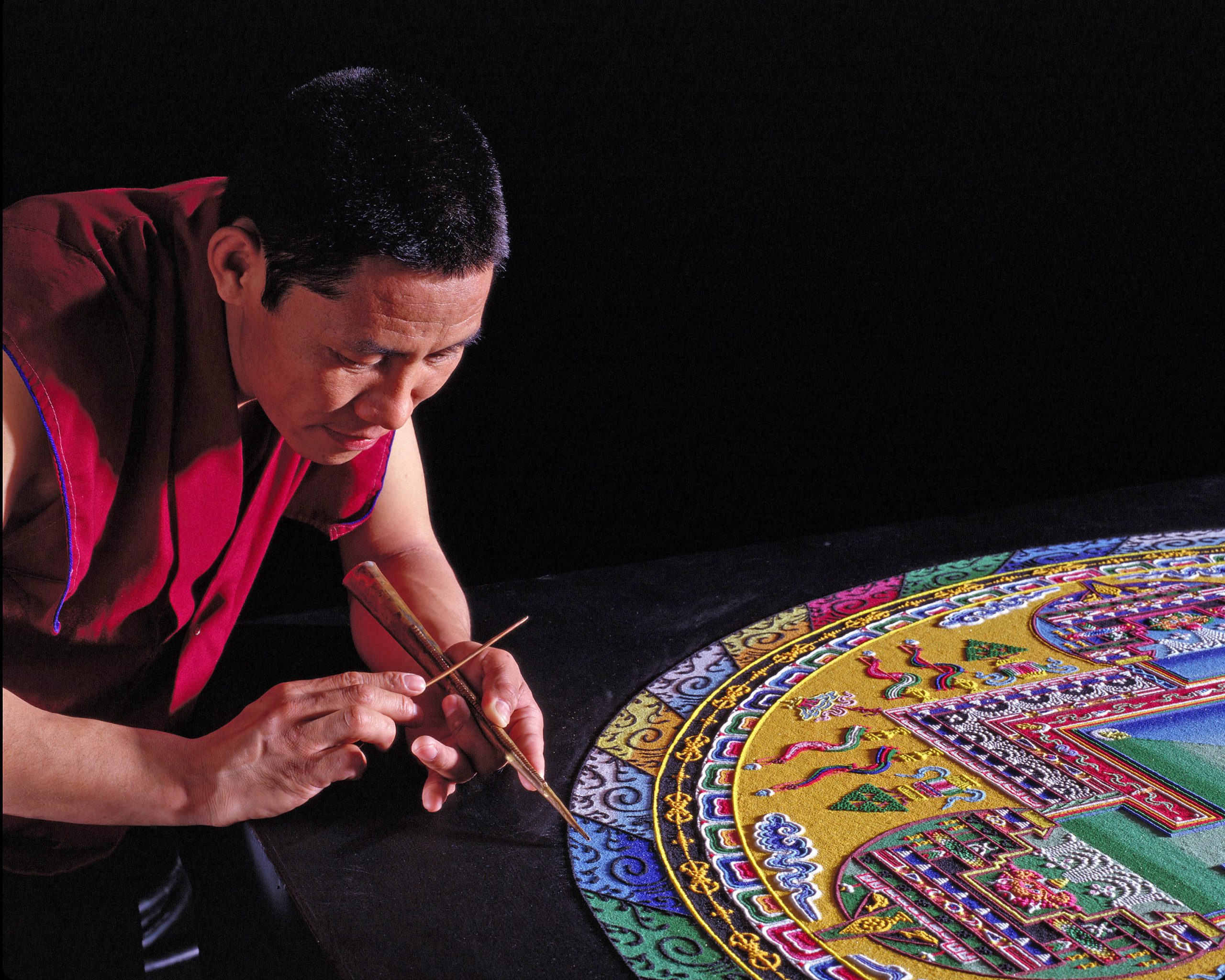 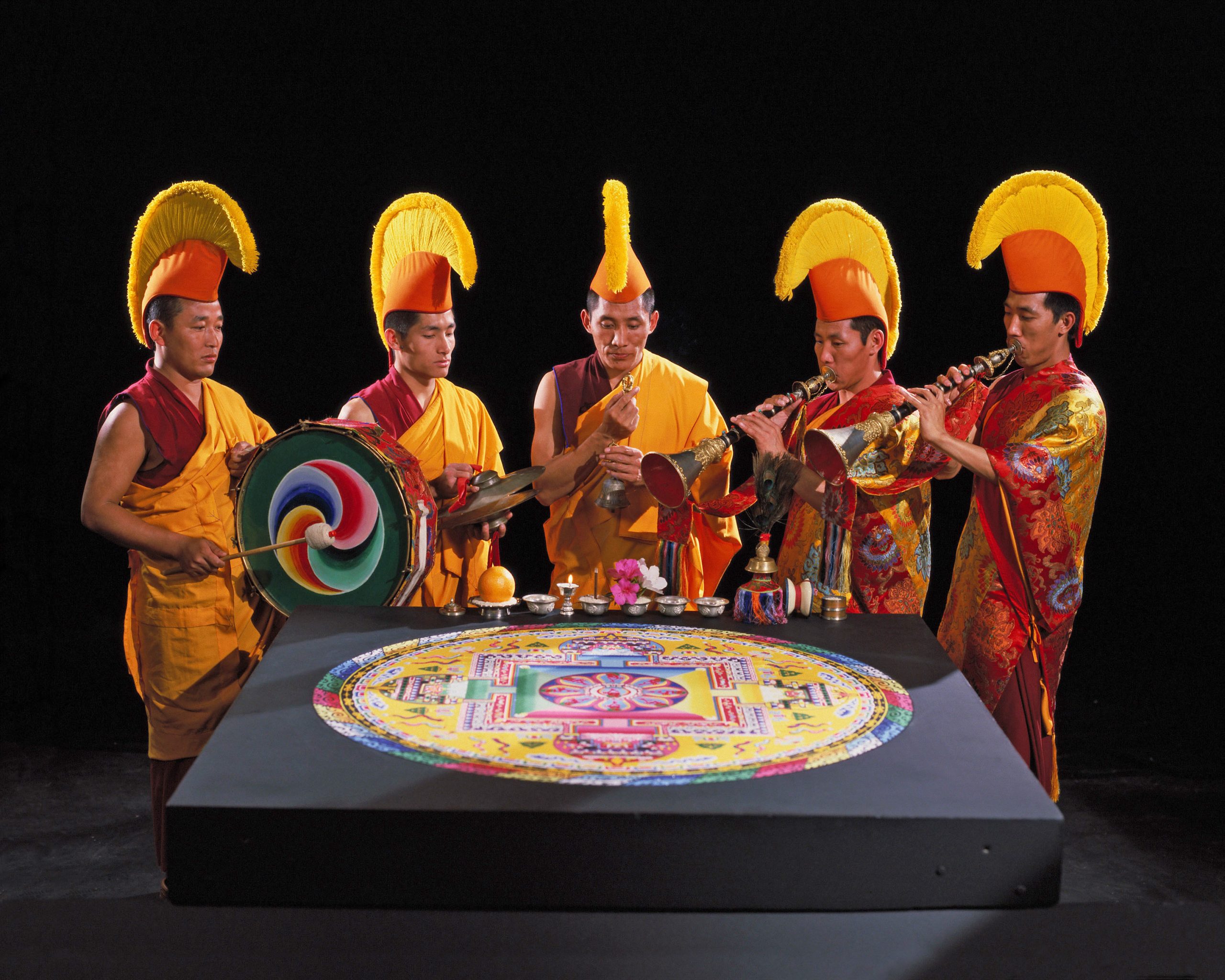