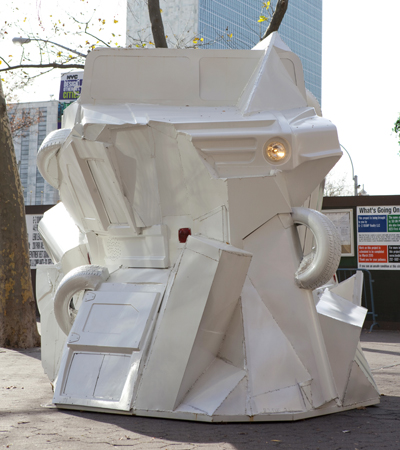 Installed at the Demonbreun Street entrance to the Frist Art Museum, Inveterate Composition for Clare (2011), by Brooklyn-based artist Rachel Owens, is composed of dismantled sections of two replica military Humvee shells, which have been reconstructed and welded together in a monumental, quasi-cubist form. The central iconography of rebuilt military vehicles suggests the fragmentation of war, while alluding to the extra layers of metal that American soldiers in Iraq and Afghanistan welded onto their Humvees and other transports to provide added protection from the improvised explosive devices (I.E.D.s) used against them. This work is at once a reflection of the horror of war and a memorial to those who have sacrificed their lives in its conduct.

A stereo system inside the sculpture initially hints at the music that soldiers riding in military vehicles might have used to calm themselves or psych themselves up for combat. But instead of hip-hop or heavy metal, the soundtrack is composed of the songs of whales and crashes of glaciers; haunting sounds that make an emotional link between human conflict and environmental vulnerability. Painted metallic white, the angular form of the sculpture suggests the jagged edges of an iceberg, establishing a connection between the global warming that is shrinking the ice pack and the consumption of fossil fuels that lies at the heart of many Middle Eastern conflicts. With its whale songs, the hulking white form also brings to mind Moby Dick, the great white whale that has come to signify humanity’s blind ambition to control forces larger than itself, whether in the context of war or the struggle with nature. The work was developed with the support of the late Clare Weiss, curator for the New York City Parks Department, who passed away in January 2010, after a long battle with breast cancer. Rachel Owens is represented in New York City by ZieherSmith Gallery.