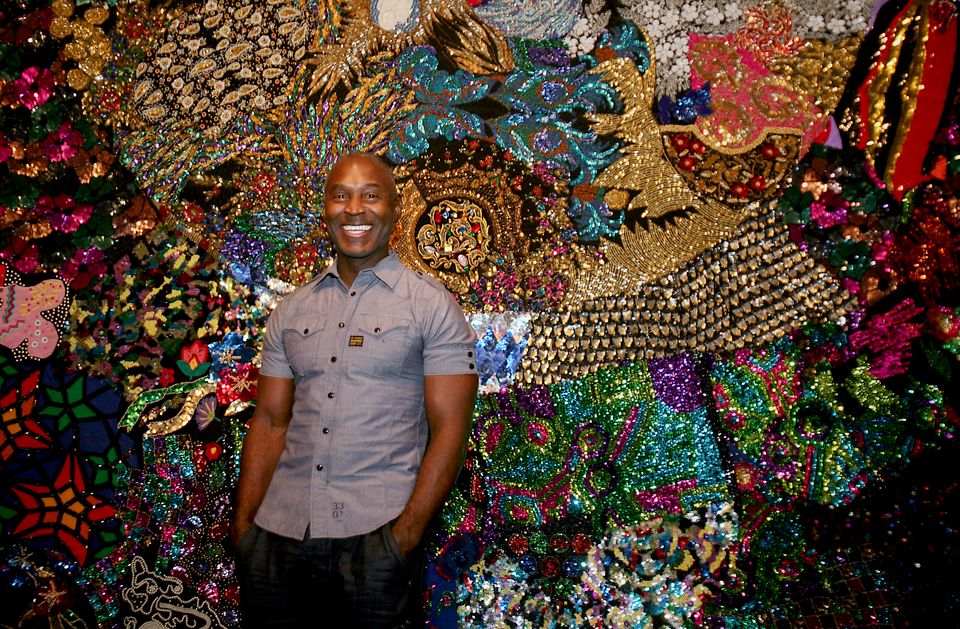 Chicago-based artist Nick Cave (b. 1959) produces work in a wide range of mediums, including sculpture, installation, video, and performance. His creations, bursting with color and texture, are optical delights that can be enjoyed by audiences of all ages and backgrounds. A deeper look reveals that they speak to issues surrounding identity and social justice, specifically race, gun violence, and civic responsibility. His trademark human-shaped sculptures—called soundsuits because of the noise made when they move—began as a response to the beating of Rodney King by policemen in Los Angeles more than twenty-five years ago. As an African American man, Cave felt particularly vulnerable after the incident so he formed a type of armor that protected him from profiling by concealing race, gender, and class.

Along with broadcasting an increasingly urgent call for equity, Cave wants his art to spark viewers’ imaginations and aspirations. This exhibition’s title, Feat., refers to the exceedingly hard work that goes into attaining success (it takes, for example, roughly seven hours to hand-sew just one square foot of a button soundsuit). It also plays on how talent is often listed in promotional materials—an appropriate nod to Music City and its creative community. Through this immersive installation, Cave hopes to provide a transformative place where your narrative can be featured and your dreams can soar.

ABOUT THE ARTIST
Nick Cave was born in Fulton, Missouri, in 1959. He received a BFA from the Art Institute of Kansas City and an MFA in fiber arts from Cranbrook Academy of Art, outside of Detroit. Cave’s work has been featured in monographic exhibitions around the globe, at venues such as the Cranbrook Art Museum, the Denver Art Museum, the Institute of Contemporary Art in Boston, and the Massachusetts Museum of Contemporary Art, and is housed in the permanent collections of many major institutions, including the Brooklyn Museum, the Detroit Institute of Arts, the Hirshhorn Museum and Sculpture Garden, and the Museum of Modern Art. Cave has received several prestigious awards, among them the Joan Mitchell Foundation Award, the Artadia Award, the Joyce Award, and multiple Creative Capital Grants. He has lived and worked in Chicago since 1990 and is the Stephanie and Bill Sick Professor of Fashion, Body, and Garment at the School of the Art Institute of Chicago. He is represented by Jack Shainman Gallery in New York.

EXHIBITION PUBLICATION
An unorthodox exhibition “catalogue” will accompany the Frist Art Museum’s presentation. It is a large tapestry or spreadsheet of sorts, made of a durable, weather-resistant material that, unfurled, can potentially serve an array of functions—wall art, a picnic blanket, a tablecloth—depending on the user’s imagination and preference. In the spirit of Cave’s sculptural work and public performances, it also offers the viewpoints of multiple perspectives from a cross-section of disciplines. Collaborators on past projects, including choreographer Bill T. Jones, and current Nashville creatives, both established and emerging, were invited to reflect on aspects of Cave’s practice, such as justice and transformation.

In conjunction with the exhibition, Cave will direct a months-long community engagement project that will culminate in two free public performances. These major events will feature live dance, music, soundsuits, spoken word and much more. Cave’s original compositions will engage Middle Tennessee’s increasingly multicultural population through ten social services organizations, including Conexión Américas and the Oasis Center. The performances will showcase local talent from performing arts organizations and universities, including dozens of professional and student dancers, musicians working in a range of genres, vocalists, poets, spoken word artists, and others.

Connect with us at #NickCaveFeat

CLICK HERE to learn more about Extrasensory, a companion exhibition to the Nick Cave exhibition. 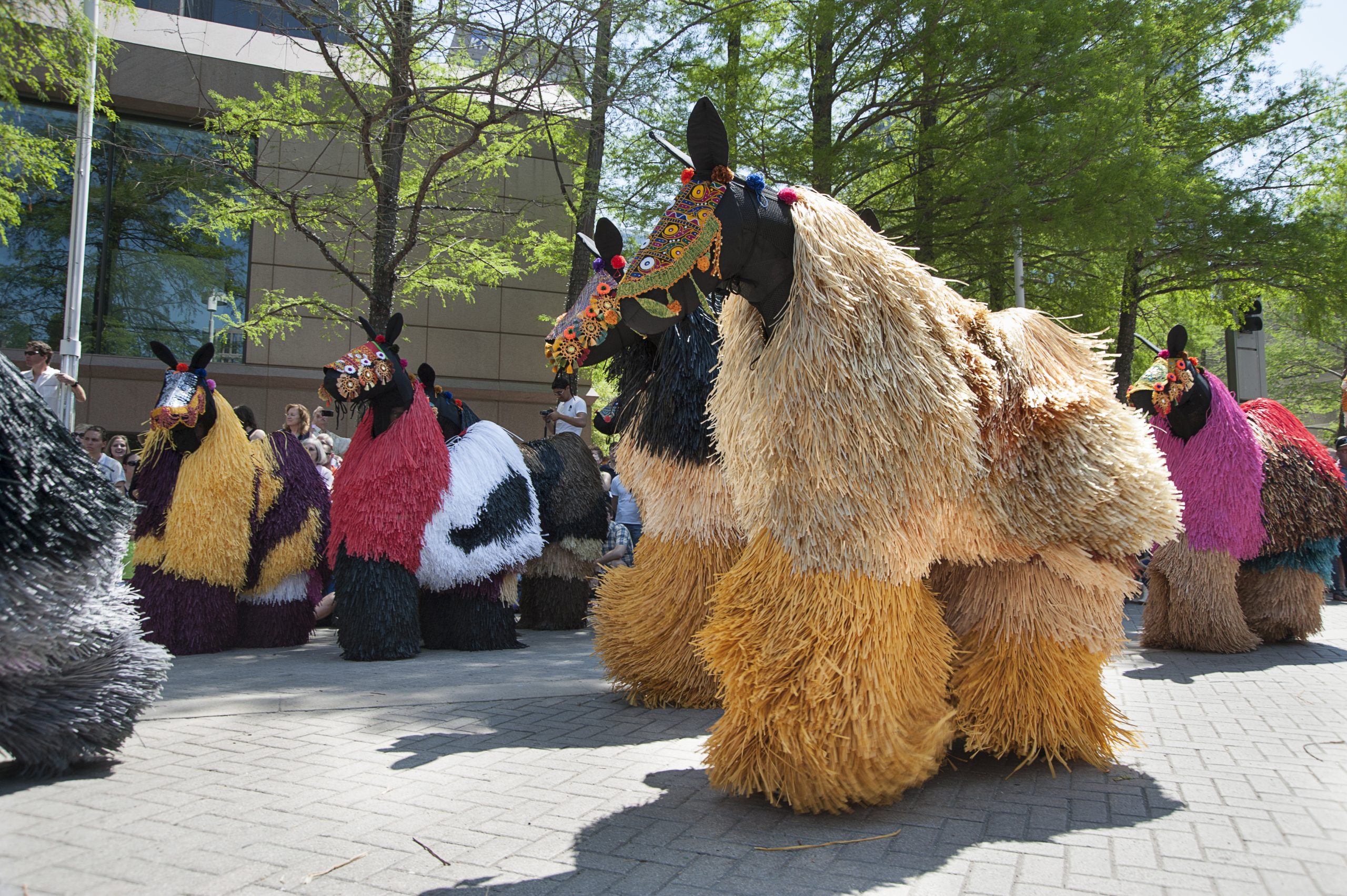 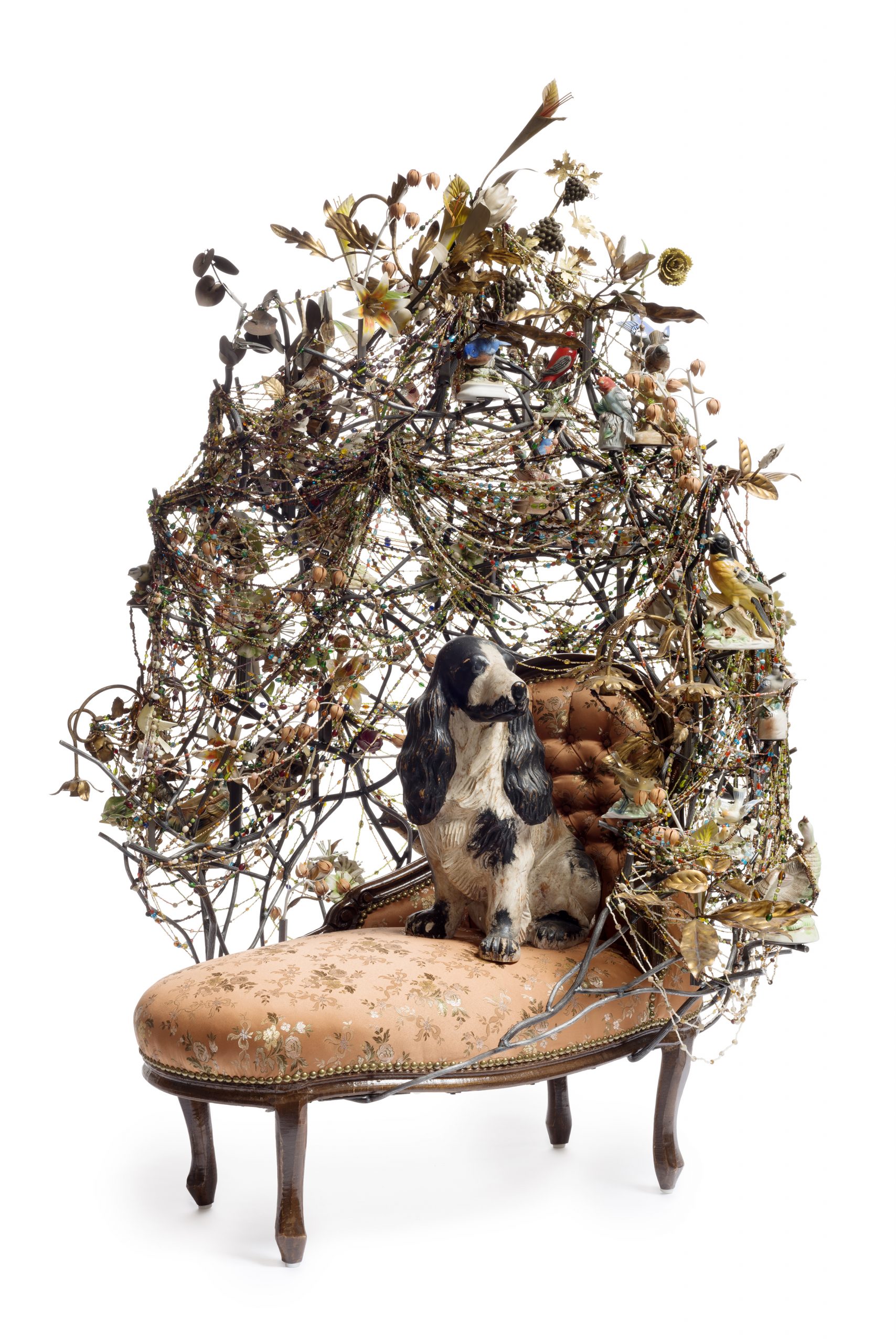 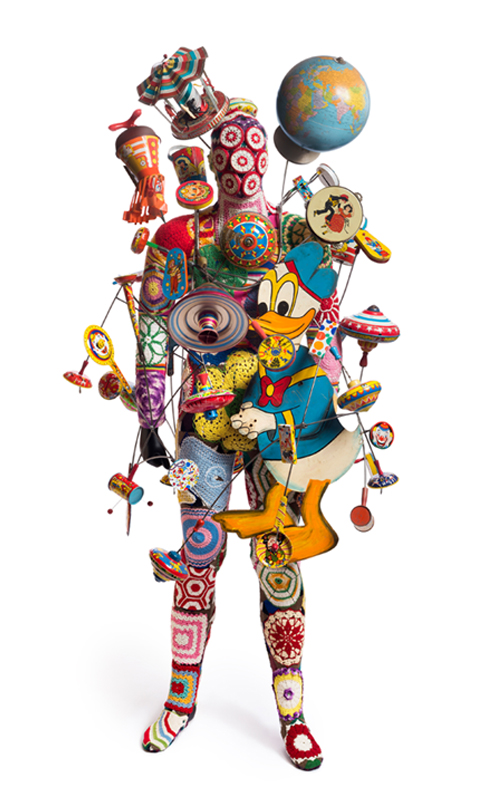 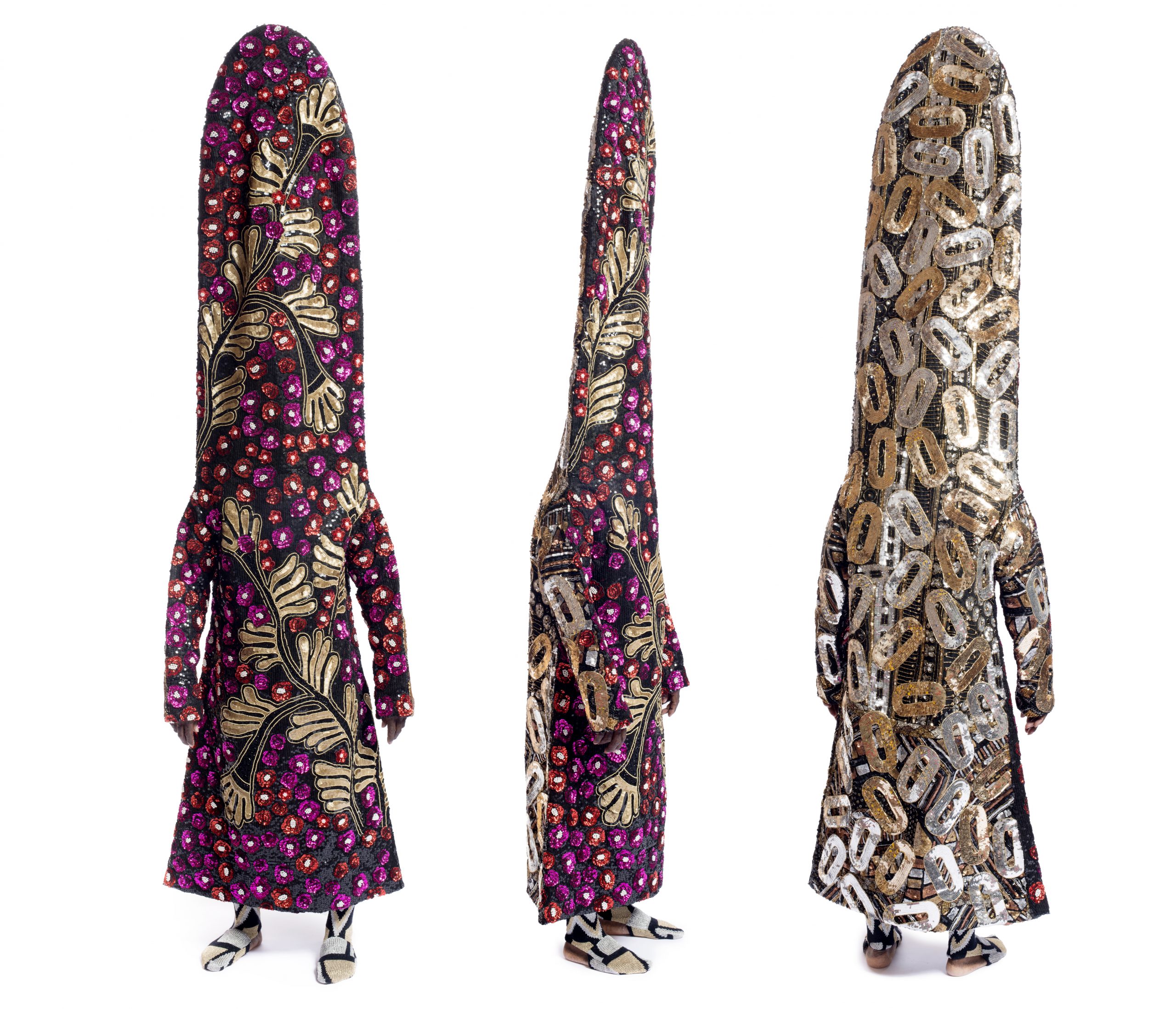 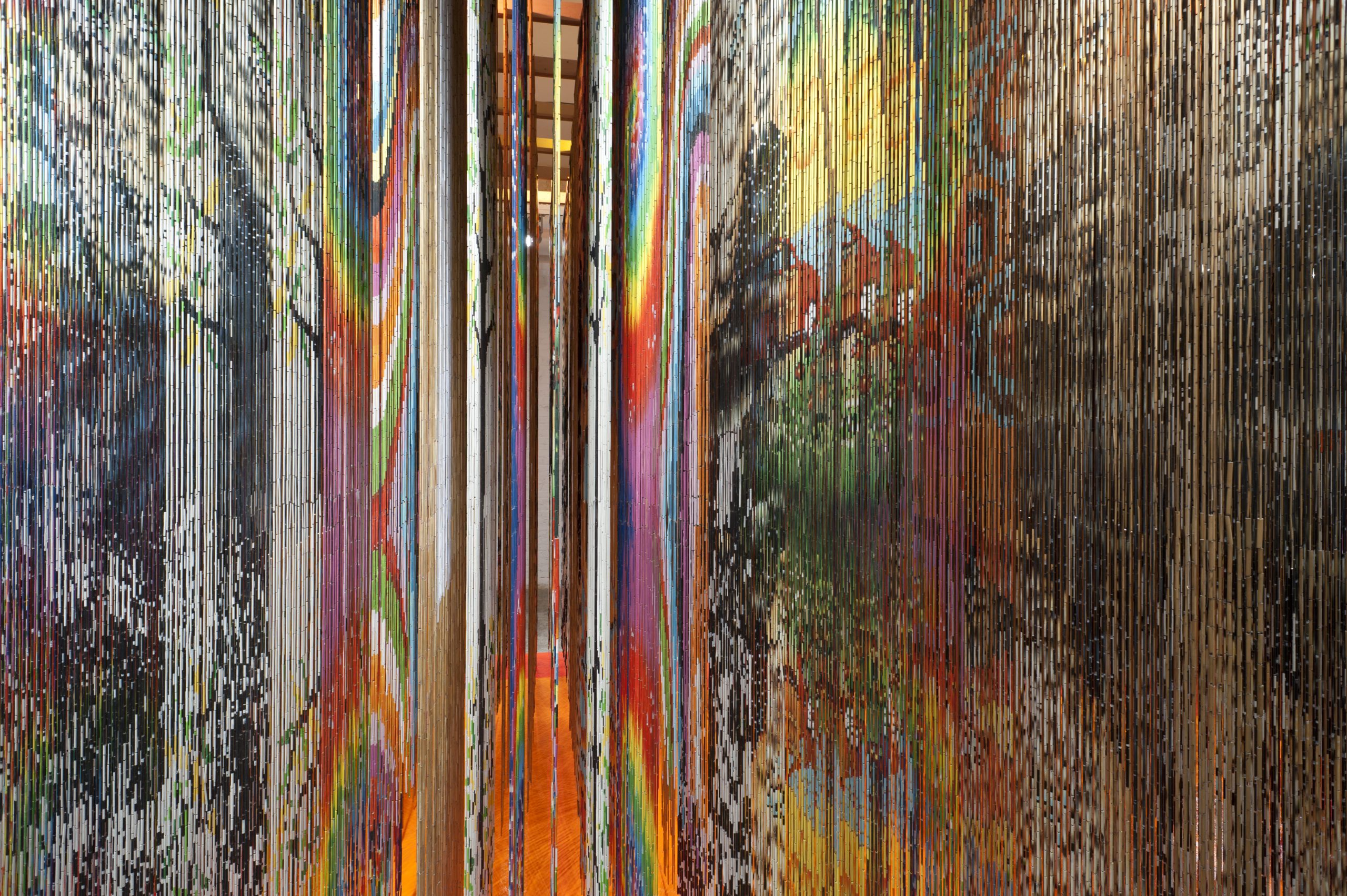