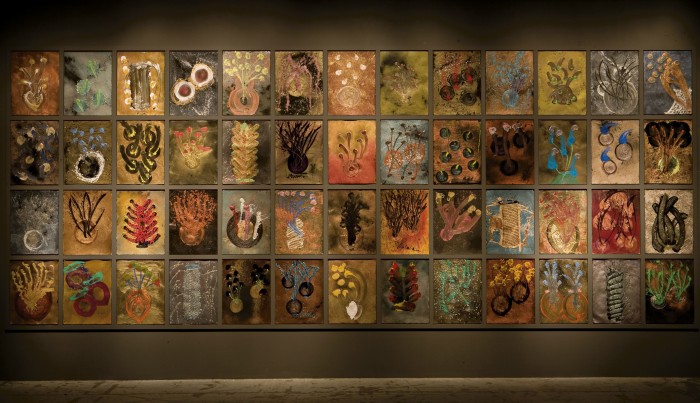 Chihuly at the Frist

Dale Chihuly,the most acclaimed glass artist of our time, is beloved for his abstract evocations of sea life, flowers, and other graceful subjects.

There are few contemporary artists whose name is as synonymous with the medium in which he works as Dale Chihuly, who is widely regarded as the most innovative glass artist working today. Active since the 1960s, Chihuly is credited with almost single handedly elevating the postwar American studio glass movement to the international prominence it now enjoys.Chihuly at the Frist showcased the unsurpassed mastery of the artist and his Seattle glass-studio collaborators in nine installations drawn from some of Chihuly’s most acclaimed series, designed specifically for the Frist Art Museum’s galleries.

Among the featured series were Venetians, a brilliantly colored and intricately formed group of works that was inspired in 1988 by a famed Italian glass master; Ikebana, which was informed by the Japanese art of flower arranging; Persians, conjuring the exotic and enchanted lands of the Far East; Macchia, borne of Chihuly’s desire to use hundreds of colors in rippling forms based on vases created in the famed Venini glass factory in Venice; and Seaforms, which celebrates the waving and rippling shapes and rhythms of underwater life.

In addition, the exhibition included a spectacular Mille Fiori (a thousand flowers) garden and the Sea Blue and Green Tower, a mammoth sculpture that massed colorful, curving forms in a large-scale work that rose nearly ten feet tall and occupied an entire gallery. Also on exhibition  was a wall of Chihuly’s drawings that served as independent works of art and “blueprints” to communicate and inspire his glassblowers to bring his designs to life and to improvise on the themes he created.

The acclaimed documentary Chihuly in the Hotshop  was on continuous view throughout the exhibition. Directed by Peter West, the film followed the artist in 2006, as he worked in the Museum of Glass’s hotshop in Tacoma, Wash., an amphitheatre designed specifically to allow the public to view artists at work. The film received its premiere at the 2008 Palm Springs International Film Festival.

About Dale Chihuly
Dale Chihuly was born in Tacoma, Washington and first blew glass in 1965, but his calling was confirmed in 1968, when he traveled to the island of Murano in Venice and absorbed the secrets of traditional glass blowing. As a professor (1969-1980) at the Rhode Island School of Design, and as a co-founder of the Pilchuck Glass School near Stanwood, Wash., Chihuly helped introduce the European studio (team) model of glass blowing to the studio glass movement in the United States. He served as artistic director at Pilchuck until 1989, and under his guidance, it became a gathering place for artists from all over the world.

While Chihuly has been a significant innovator of form and color, his greatest contribution to the discipline has been to emphasize the natural forces of heat, gravity and centrifugal force in the creation of glass.In his art, Dale Chihuly walks a fine line between conscious intention and chance occurrence. While much of his work is inspired by the natural world, Chihuly seeks to emulate the process of nature, rather than nature, itself.Over more than four decades, Chihuly’s art has explored line, color, form and technique with works ranging from indoor and outdoor, site-specific installations, like those at the Frist Art Museum and Cheekwood, to single, table-top vessels. The vision, ambition and scale of his pioneering works revolutionized the studio glass movement and helped demolish barriers that had previously prevented glass objects from being viewed as a serious art form.This exhibition is organized by the Frist Art Museum in cooperation with Dale Chihuly.

The work displayed is protected by copyright and any copying is expressly prohibited.