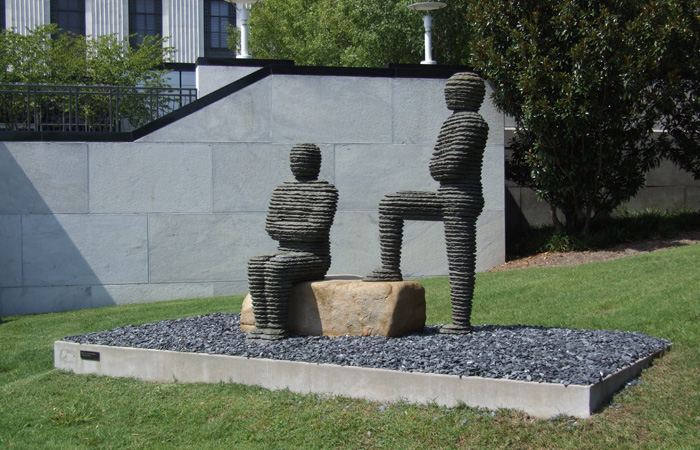 Asa & Yehoshafat, a work by New-York based sculptor Boaz Vaadia, is installed near the Demonbreun Street entrance to the Frist Art Museum.

Born in Israel in 1951 and raised on a farm where he developed a deep love for the earth, Vaadia creates works in stone and bronze which celebrate the spiritual connection between humanity and nature. While not specifically inspired by the Bible, the work’s title is a reflection of the artist’s cultural heritage, calling to mind the father and son who ruled the kingdom of Judah during the 9th century BCE.

The monumental figures seem to be composed of stacked sedimentary rocks. To create this effect, the artist used a hammer and chisel to carve each layer from bluestone. He then stacked them to create a human form, and finally cast the stone constructions in bronze. The two figures appear to have been shaped naturally, as if by the shifting of the earth’s layers and the eroding effects of wind or water, a reminder that, in the artist’s words, “Man came from the earth and in death returns to it.”

Boaz Vaadia’s works have been installed publicly in locations throughout Manhattan, including Time Warner Center, and in museums and sculpture parks around the world.