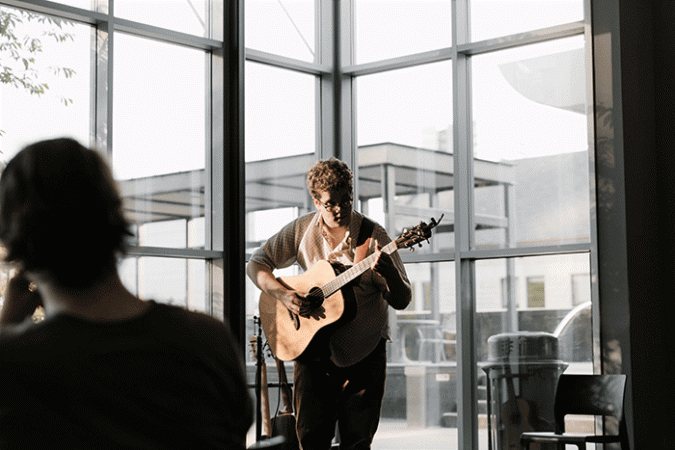 Music at the Frist: Grant Ferris, Classical Guitarist and Composer

Grant Ferris, a Nashville-based guitarist, composer, and songwriter, holds a master’s degree in Classical Guitar Performance from the San Francisco Conservatory of Music, where he received a scholarship to study under David Tanenbaum. He also earned a Bachelor of Music degree from the University of Denver, studying with Ricardo Iznaola and Masakazu Ito. While in Denver, Grant and was the first recipient of the Helen M. Garrett Award for Outstanding Graduating Classical Guitarist.

In the fall of 2008, Mr. Ferris studied guitar, composition, and chamber music with composer and conductor Simone Fontanelli of the Salzburg Mozarteum while in Milan, Italy. Also while in Italy, Mr. Ferris premiered the new work for guitar trio “Los Tres Espiritos” by composer Michael Blankenship at the Università Cattolica del Sacro Cuore. He has played in master classes taught by the Los Angeles Guitar Quartet, Fabio Zanon, Adam Holzman, Eduardo Fernández, and the Minneapolis Guitar Quartet.

A recipient of the Louis Armstrong Jazz Award, Ferris has been praised for his versatility as a guitarist playing in many styles from classical, bluegrass, jazz, and rock. In addition to guitar, Grant plays dobro, lap steel, banjo, bouzouki, trumpet, and can fake his way through on a piano.

As a composer, Grant has been commissioned to write for professional groups such as Duo Tandem, Duo Boheme, Nashville Composers Collective, and the San Francisco Guitar Quartet. His most recent commission is for the Patterson/Sutton Duo. His compositions have been performed in Chicago, New York, Nashville, London, San Francisco, and Cyprus. As a songwriter, in addition to his own efforts, Grant has worked extensively with his sister, recording artist Ferris, Firebreath Records, and avant-garde puppet troupe Sailors and Maidens. In 2014, he released Ten and Six, his first CD comprised of all new solo guitar compositions. February 2018 marked the release of his EP No, Seriously, a full-band recording of new music featuring a nylon string banjitar custom made for him by the Deering Banjo Company.

When not doing music, Grant is an avid home cook and baker.